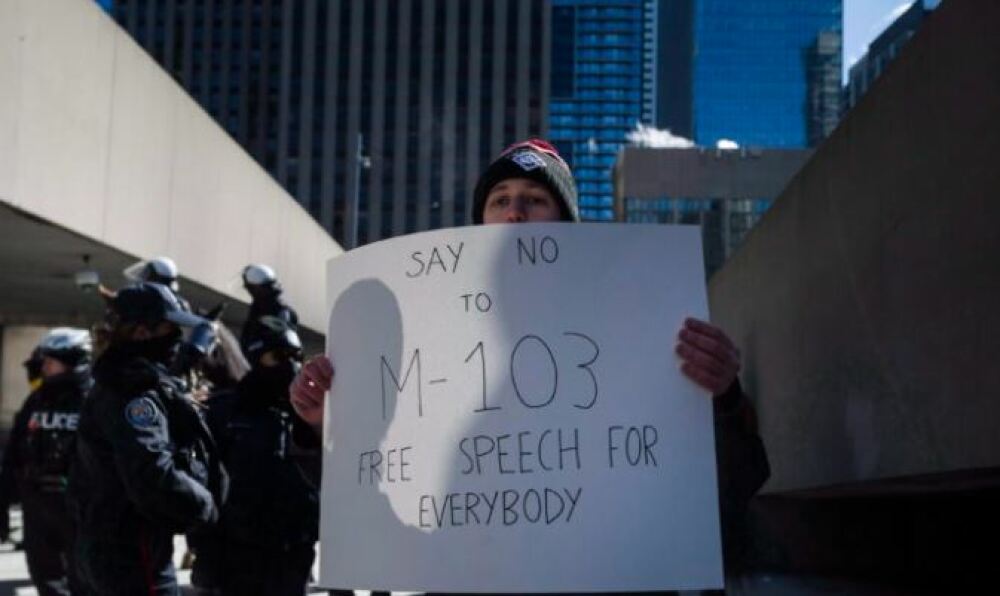 A protester holds a sign during a demonstration against the House of Commons motion M-103 at the Toronto City Hall on March 4, 2017. (The Canadian Press/Christopher Katsarov)

Despite What Activists Claim, There’s No ‘Islamophobia Industry’ in Canada

In 2017, the Canadian Parliament voted in favour of Motion 103, a resolution which called for a committee to study a path to development for a “whole-of-government approach” to combating Islamophobia and other forms of racism. But no matter how frequently or persistently the sponsor of the bill, Liberal MP Iqra Khalid, and her political allies were pressed for a definition of Islamophobia, they remained evasive.

Critical observers wanted to know if M-103’s “Islamophobia” meant expressed hatred of people—a legitimate definition of hatred in free societies—or opposition to a belief system, normally a protected category of expression. Much was at stake. After all, resolutions are not laws, but they are often the first step in the creation of a law.

If Islamophobia meant hatred of Muslims, as antisemitism means hatred of Jews, then most Canadians would have approved the resolution. But if it meant hatred of Islam, well, then, Canadians were being asked to give assent to the notion that beliefs, as well as people, can be perceived as “victims.” In other words, a blasphemy law of the kind that is operative in places where negative statements about Islam are met with punishment, sometimes imprisonment, or worse.

Impatient with the stonewalling politicians, I contacted Jasmin Zine, a professor of race, gender, ethnic, and postcolonial studies at Wilfrid Laurier University, considered to be an expert on Islamophobia. I asked her to provide her definition of Islamophobia, which was immediately forthcoming: “Islamophobia is a fear and hatred of Islam and Muslims that translates into individual, ideological and systemic forms of oppression.” Note that it is Islam, not Muslims, that is centred as the primary “victim” of the hatred. And “translates” appears to mean that the person offended is the interpreter, and therefore the judge of what is or isn’t Islamophobic.

The report hypothesizes a vast conspiracy of individuals and organizations “that demonize and marginalize Islam and Muslims in Canada.” (Islam again first, note.) But apart from a few white supremacist groups shunned by all right-thinking Canadians, the name-and-shame “watch list” mainly targets individuals and organizations whose alleged “phobia” comes down to the publication of factual public-interest information concerning radical Islam and/or legitimate challenges to hate-fuelled lies about Israel.

As I am one of the defamed “influencers” implicated in this alleged conspiracy, I naturally take a rather dim view of the report’s worthiness. However, I am comforted by the excellent company that surrounds me. My friend Raheel Raza,  for example, an award-winning human rights activist and founder of the Council of Muslims Facing Tomorrow, is absurdly described, in a special category created for “Muslim dissidents” and “ex-Muslims,” as not only Islamophobic, but an “instigator and propagator of anti-Islamic narratives.”

Raheel is a devout Muslim. Her crimes seem to be friendliness to Israel, a history of deploring radical Islam, and advocating for Islamic reforms that include a commitment to the division of church and state that allowed Christian European countries to democratize. The report accuses Raza of using her “insider” status to propagate “anti-Islamic narratives.” Oddly enough, the report does not accuse the far-left Jewish anti-Zionists in the Boycott, Divestment and Sanctions movement (BDS), whose goal is the abolition of Israel as a Jewish state, of using their “insider” status to propagate antisemitic narratives. Indeed, the report considers them heroic comrades-in-arms.

Which is also problematic. The author did not disclose her own deep involvement in the BDS movement, as would be appropriate in a report of this nature. Such disclosure is especially pertinent, because she is also the lead author of a Canadian Muslim Voting Guide, issued days before the October 2019 federal election, in which candidates are ranked according to their usefulness in advancing Muslims’ interests. Prime Minister Trudeau merited a “fail,” because he had publicly—and correctly—identified BDS as “a form of antisemitism that harms Jewish students on Canadian campuses.” As Michael Mostyn, CEO of B’nai Brith, observed on that occasion, “It is totally unacceptable that government funds have been used to promote an antisemitic movement in Canada.” (The report’s funding agency, SSHRC, was “not consulted” on the use of their money for this guide.)

My entry does not contain many errors, but it reads like a Wikipedia account. Apparently, my Islamophobia is inherent to the facts that I am not left wing, I oppose BDS, and I critique radical Islam. The report says, without commentary, for example: “Kay is known for her anti-liberal views, warning that the ‘alt-left’ threaten free speech and support the violence of Antifa. She has spoken of an alliance between ‘radical Islam’ and the left.”

True, I have written on these subjects. Also true is that the alt-left does threaten free speech and support violent Antifa, and there is an entente, known as the “red-green” alliance, between the far left and radical Islam. The report says that my website “advertises articles regarding antisemitism, rape culture, the niqab, ‘Islamism,’ [and] ‘honour/shame culture.’” True, but none of my columns target Muslims qua Muslims; they critique ideas, beliefs and practices associated with fundamentalist cultures. (Note that “Islamism” and “honour/shame culture” are in scare quotes, as if they did not exist. But they do.)

The report takes issue in my distinction between honour killings and domestic violence, implying there is no difference. But there are many well-documented differences, and the objection for my bringing them to light is part of the determination to chill discourse that contradicts the victimhood narrative necessary for leverage into political action. Interested readers can find my views on these subjects—most importantly my views on attempts by Western activists to insinuate blasphemy against Islam into Canada’s Criminal Code, clustered on one page of my website. They can judge for themselves if they constitute hatred of Muslims or are legitimate criticisms of fundamentalist Islam and certain associated misogynistic practices.

The notion that Canada is roiled by anti-Muslim hatred is a myth that activists won’t let die, in spite of evidence to the contrary. There is no “Islamophobia industry” in Canada. This fatwa-esque report is, however, Exhibit A for an Islamism-related industry of quite another sort, one that does not merit a penny more of federal funding.