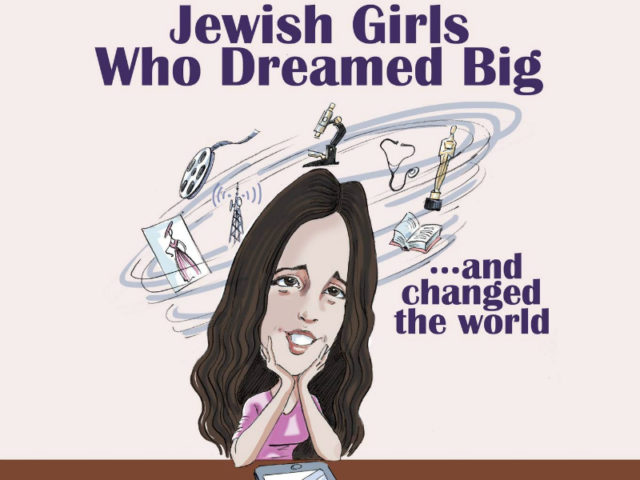 Janice Baryshnik of Toronto is a psychologist and an educator. Helping adolescents reach their potential has been the focus of her career for 30 years. A deeply committed Jew, Baryshnik found inspiration for realizing her own ambitions in stories about Jewish women who were innovators in their chosen fields of endeavour.

Canvassing her daughter, 43, and her daughter’s circle of friends, however, Baryshnik discovered that their knowledge of famous Jewish role models was alarmingly circumscribed. Having just suffered the loss of her Holocaust-survivor parents-in-law, and motivated to ensure her granddaughter and four grandsons were better informed, she wrote the book, Jewish Girls Who Dreamed Big…and changed the world.

There are 18 chapters in the book, each one a life profile reduced, in brisk and reader-friendly prose, to a few pages, well within a young reader’s attention span. Many names were Jewishly familiar to me, like Ruth Handler (Barbie doll), Jean Nidetch (Weight Watchers) and Simone Veil (first female president of the European Parliament). Other names were familiar, but not Jewishly, like Edith Head (top Hollywood designer) and Hedy Lamarr (movie star and pioneer inventor of wireless technology).

And some names were new to me altogether, like Rita Levi-Montalcini (Nobel prize for medicine), Rabbi Regina Jonas (first female rabbi), Evelyn Berezin (designer of the first word processor), Gertrude Elion (Nobel prize in medicine for a drug that helped cure leukemia in children) and Sonia Terk Delaunay (Russian-born artistic visionary, the first living female artist to have a retrospective exhibit of her work at the Louvre).

READ: KAY: ARE ARABS WORSE OFF IN ISRAEL? THE NUMBERS SAY NO

Every profile is a tiny tapestry: a warp recounting the trajectory of achievement and a weft of telling anecdotes adding colour and punch to the narrative. Delaunay’s artistic career got its start when she designed a quilt for her son, which got her interested in the artistic style known as “simultaneism.” Berezin started her own word-processing company, Redaction, in the 1960s, because the board of directors of the New York Stock Exchange rejected her appointment as vice-president in charge of computer systems – on the grounds that “the sometimes profane language on the trading floor was not appropriate for a woman’s ears.”

Regina Jonas, who was ordained as a rabbi in 1935 in an astonishing exception to the male rule, undertook many rabbinic duties after she was deported to Terezinstadt, including the difficult task of “meet(ing) the trainload of Jews at the station and help(ing) the newly arrived Jewish passengers adjust to the shock, disorientation and horrific losses they were experiencing.” Jonas was murdered at Auschwitz when she was 42.

The final entry, Henrietta Szold, is a name every Jewish youngster should know. Szold was a scholar, an essayist and an “early theoretical Zionist.” Baryshnik admits to a special fascination and reverence for Szold’s stunning achievements in shaping Jewish culture in the United States, and Israel, after she made  aliyah. Israel’s Hadassah Medical Center and North America’s Hadassah-Wizo are part of Szold’s legacy. It is hard to imagine a more Jewishly inspirational role model.

I was curious to understand Baryshnik’s metrics for triage. Who merited inclusion? Who did not? She told me she conceived each profile as “a slice of Jewish, gender-related history.” She wanted – and got – diversity of achievement. The arts, Jewish scholarship, secular entrepreneurship, technology, medicine, ahavat Yisra’el: the gamut can be found in her book.

But what about modern intellectuals, feminist Jewish icons like Betty Friedan, Gloria Steinem and Susan Sontag? Too contemporary and too controversial. Baryshnik emphasized her decision to avoid stories grounded in ideology. All of her subjects broke gender barriers, because they had personal dreams they wanted to fulfil, not political change they intended to embody. None of them sought to valorize the transgression of community standards.

That, for me, is one of the book’s most refreshing aspects in this highly politicized era, and a good reason for Jewish educators across the religious spectrum to consider including this little gem in their program of studies.