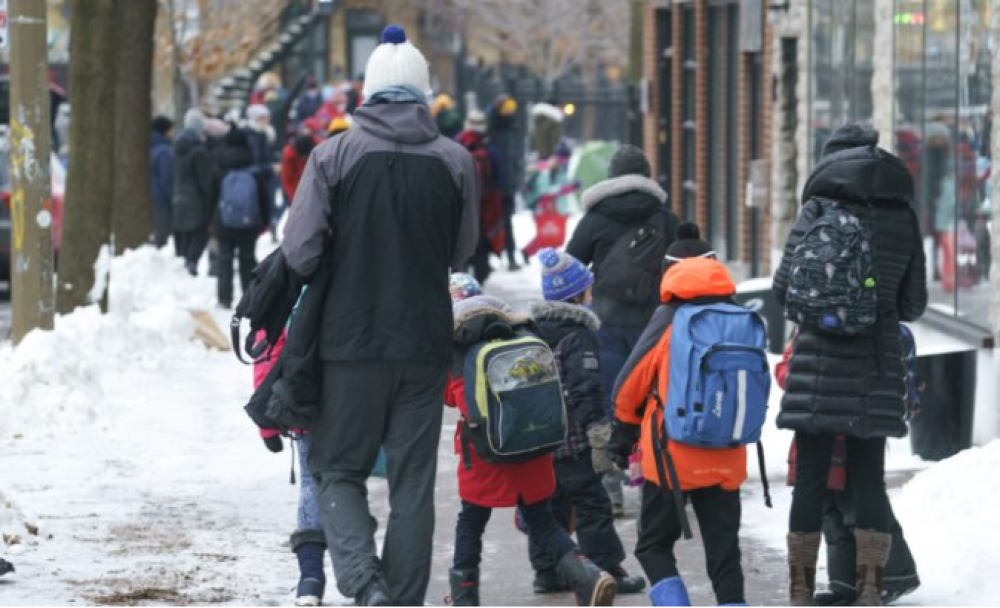 Parents walk their children to school as primary schools reopen following the Christmas break, in Montreal on Jan. 11, 2021. (The Canadian Press/Paul Chiasson)

Equal Shared Parenting Should Be Enshrined in Law in Canada

In March, West Virginia passed legislation entrenching a “rebuttable presumption” that, following separation, parents will enjoy equal time with their child(ren). That is, in the absence of reasonably suspected child jeopardy, judges will no longer award “custody” to either parent. Equal shared “parenting” (ESP) will be the norm. West Virginia joins Arizona (2013), Kentucky (2018), and Arkansas (2021) in arriving at this enlightened, long-overdue solution to the inherent deficits of the traditional winner-takes-all system.

In Canada, where post-separation parenting rights are a federal matter, advocacy for ESP has been strong for decades, but political will for actual legislation remains weak to null.

There is evidence that voluntary shared parenting “now appears to be the most common parenting arrangement in Canada in cases where both parents have had a significant role in the lives of their children before separation,” according to a Queen’s University research paper. One might therefore argue that there is no need for legislation to entrench what is happening organically. But the sad fact is that in the absence of parental cooperation, the legal mechanisms for one hostile parent to take revenge on the other through financially ruinous litigation, parental alienation, and other abusive strategies are still available, thus still enabling injustice to loving parents and children trapped in the emotional churn such hostility creates.

Data from a cornucopia of peer-reviewed studies tells us that children benefit enormously from equal time, or as close as possible to equal, with both parents, even in babyhood. Data also shows that failure to spend significant time with one parent leads to a failure in bonding. For one important example among many, in 2016 Dr. Richard Warshak, clinical professor of psychiatry at the University of Texas at Dallas, published an analysis of the relevant scientific literature on parental involvement after separation. More than 100 experts in the field endorsed Warshak’s conclusion that, “[j]ust as we encourage shared parenting in two-parent homes, the evidence shows that shared parenting (for parents who live apart) should be the norm for children of all ages, including sharing the overnight care for very young children.” That paper has been translated into at least 18 languages and has informed legislatures and parliamentary deliberations throughout the United States and United Kingdom, as well as Israel, Finland, Sweden, and Canada.

Polls show that ESP is popular with the general public. In a recent interview with Paul Russell of LegalMattersCanada.ca, family law attorney and long-time ESP advocate Gene Colman addressed the results of a March Nanos poll, which found that support for ESP in the general public has increased since 2017. Among the key findings of the poll: 48 percent of Canadians strongly support ESP, as against 35 percent in 2017, and over eight in ten Canadians (64 percent) support having a free vote in Parliament on legislation that includes the principle of ESP after separation, absent special circumstances.

Observing that only 10 percent of Canadians actually oppose legislating ESP, Colman explained: “That miniscule fraction includes most family law lawyers, social workers and psychologists, many of whom make a lot of money from the horror and hell that people involved in family law litigation currently must go through.” With wry candour, Colman added, “By endorsing a rebuttable presumption of [ESP], I am speaking against their and indeed my own economic interests. After all, we all make money from parents who can’t agree on what the parenting schedule will be.”

One of the most interesting key findings of the new Nanos poll is that about half of Canadians say that if a candidate or party supported the principle of ESP after separation, it would have no impact on their vote. But, significantly, almost one in three (32 percent) said such support would make them more likely to vote for that party or candidate. Interestingly, Colman notes, support is higher in the United States: “American polls show that approximately 90 percent of citizens support [ESP],” he told Russell. In Vancouver and parts of Quebec, according to Colman, a presumption for 50/50 parenting time is becoming de facto, but not in the rest of Canada.

ESP was a plank in former prime minister Stephen Harper’s platform as far back as 2004, and to my knowledge was never officially abrogated. Yet, not only did Harper fail to address the issue as prime minister, he instructed his cabinet (30 members, several of whom would have supported ESP) to quash Bill C-560, a 2014 private member’s bill sponsored by former MP Maurice Vellacott, proposing a rebuttable-presumption amendment to the Divorce Act. Harper’s hostility to the proposed bill seemed inexplicable to me, for he surely knew it would have popular support. Many advocates for ESP were disturbed by the fact that they, who could have provided reams of objective data on the issue, were excluded from consultation, but the testimony of the Canadian Bar Association—whose members are the biggest financial stakeholders in the adversarial system—was welcomed.

It is past time for a free vote on this issue. Equal parenting time and equal parenting authority are principles that may be resisted by ideologues who believe the mother is the essential parent and the father’s role contingent, but they are principles that all reasonable people will find fair and just. This is a children’s rights issue. It is neither liberal nor conservative to believe that children belong to their parents, not the state. Or to believe that, absent extraordinary circumstances, the state should have no more power after separation to rank parents as “better” or “worse” (an assessment that children normally have no desire to make) than it had before separation. That is, none.

The ESP default does not bind amicably splitting couples to 50/50. Individuals will be free to make their own arrangements. Its primary value lies in precluding the financial and human wreckage strewn about during and following contested cases of child custody. In Canada, 79 percent of of those cases ends with the mother being awarded sole guardianship.

According to recent amendments to the Divorce Act, the word “custody” is out; “parenting time” and “decision making” are in. The change improves the optics. Nevertheless, the root problem persists: The state still has the unnatural power to “give” or to “take away” from parents access to their own flesh and blood, too often according to bias. The solution, a rebuttable ESP default in law, cannot be enacted too soon.