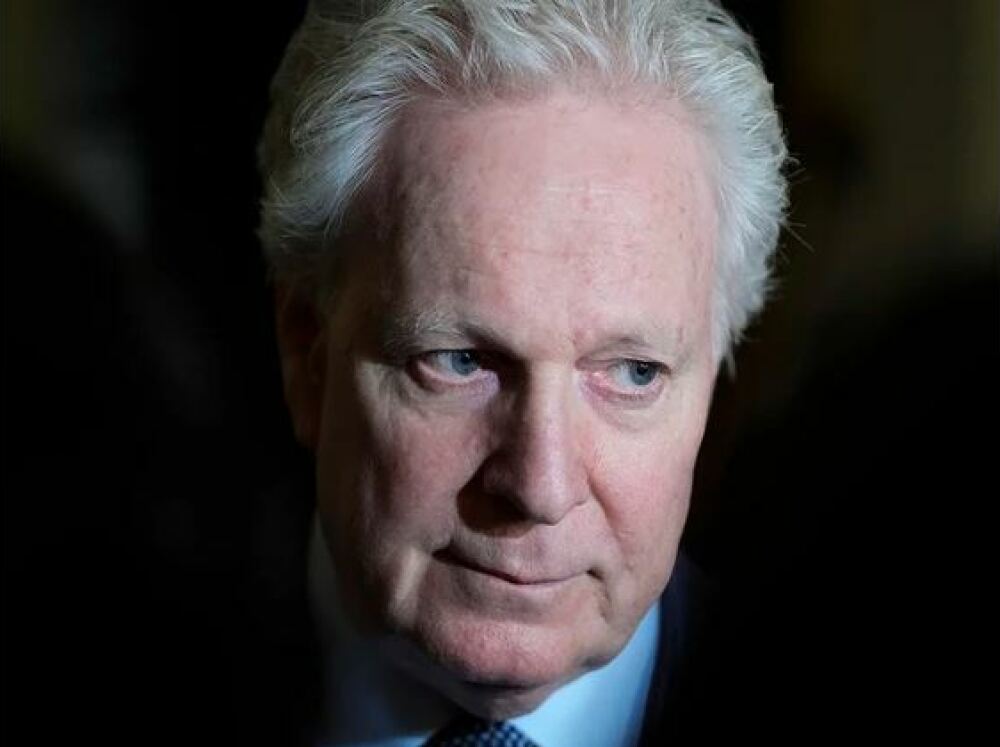 Jean Charest arrives for an event with potential caucus supporters as he considers a run for the leadership of the Conservative Party of Canada, in Ottawa, on March 2, 2022. Charest is being unfairly criticized for bringing in a bill to stop a protracted and sometimes violent student protest in Quebec while premier in 2012, writes Barbara Kay. PHOTO BY JUSTIN TANG / THE CANADIAN PRESS

Jean Charest’s putative candidacy for the Conservative Party of Canada leadership never arises without reference to the “baggage” he brings from his three terms as Quebec’s Liberal premier (2003-2012). Typically, the commentator points to Bill 78, the 2012 emergency law that ended a turbulent, protracted student protest fomented by the Charest administration’s proposed university tuition hike of $1,625 (to be spread over five years).

In her Feb. 23 column, for example, my colleague Sabrina Maddeaux wondered how Conservatives who consider the Emergencies Act (EA) invoked by Justin Trudeau to deal with the Freedom Convoy “a massive, undemocratic act of government overreach” can embrace the architect of the “draconian” Bill 78 as a potential leader. She pointed with particular revulsion to the occasional police episodes during the protests that involved pepper spray, truncheons, rubber bullets and mass arrests.

I see no parallel between the two protests. The truckers had a serious grievance: vaccine mandates threatened their livelihoods. The tuition hike in Quebec was trivial by comparison. The truckers did not prevent parliamentarians from going about their business, nor did they initiate violence. The “Maple Spring” protesters (a hubristic homage to the historically momentous 2011 “Arab Spring”) prevented students and professors from attending classes for a whole semester, and did indulge in violence. The EA can rightly be called “draconian,” as it intruded on individuals’ Charter-protected rights. By contrast, Bill 78 — an emergency law designed with a built-in kill switch after a year — was almost quaintly narrow by comparison, with zero negative impact on any individual’s private life.

Indeed, Bill 78’s clear and minimal purpose was declared in its actual title: “An Act to enable students to receive instruction from the postsecondary institutions they attend.” The controversial element was the requirement, backed by heavy fines for contravention, that protesters “book” their demonstrations with the police and accept modifications of location and date if it were judged that the protest would pose a serious threat to public order and security. (The City of Montreal has a similar provision.) The bill was backed by Quebec’s Council of Employers and the Board of Trade of Metropolitan Montreal.

The circumstances leading up to Bill 78 — rarely amplified in critics’ judgments — were more nuanced than they imply. The protesters were not victims, and neither the police nor the Charest administration were bogeymen.

Quebec’s undergraduate tuition fees in 2012 were $2,100, the lowest in Canada, against a Canadian university average of $5,586. (They remain the lowest in Canada.) This meant the average debt for a Quebec undergraduate in 2012 was $13,000 against a Canadian average of $27,000. Moreover, unlike other Canadian students, Quebec students enjoy free pre-university two- or three-year Cegep programs, many of which equip students for excellent, well-accredited careers without the need for further education. Not unrelated, Quebecers pay the highest taxes in Canada.

The tuition hike was therefore a political nothingburger that could have been settled at the ballot box, and likely would have been in the other provinces. But, as in France, student protests are a romantic tradition here, and no novelty. Major strikes took place in Quebec in 1968, 1974, 1978, 1986, 1988, 1990, 1996 and 2005. The Maple Spring was the longest student walkout in Canadian history, and also the first to be dominated by the use of social media, which heavily tilted the playing field against police in their efforts to maintain public order.

Jean Charest, seen in a file photo from Nov. 13, 2019, is set to announce he is running for the leadership of the Conservative party — a party he led before serving as a premier of Quebec.

André Pratte: Jean Charest is a true conservative, and Canada needs his leadership

Adam Zivo: Does demoting moderate Conservatives signal a right turn, or is it to punish O'Toole loyalists?

The protest enjoyed popular support. Even so, about 4,000 students dissented, forming their own group, the “Socially Responsible Students Movement.” They objected to protesters’ illegal obstruction, through intimidation and vandalism, of access to classes, as well they might. Their supporters labelled the protesting students “les enfants rois” (child kings), because they believed cradle-to-grave freebies were their entitlement.

Violence erupted at Montreal’s Palais de Congrès in April, and again in May in Victoriaville. The Victoriaville riot was particularly disturbing. The protesters had come in about 30 buses, bent on disrupting the Quebec Liberal Party’s scheduled annual convention. It was never intended as a peaceful protest, so events quickly got out of hand. Police vehicles were vandalized. In a series of skirmishes, demonstrators stormed past barriers, throwing billiard balls, rocks and chunks of cement, all capable of severe or lethal injury. Some of the estimated 2,500 demonstrators attacked and beat a police officer. Three officers were hurt, two gravely. Six demonstrators were injured in clashes that involved, yes, tear gas and rubber bullets; these were proportionate responses in the circumstances.

Negotiations were attempted, but failed, due to hardline strikers’ intransigence in discussing any deal struck by Quebec’s Liberal Party, even though drawn up in co-operation with student unions and major Quebec labour unions. Partly motivated by the realistic possibility that the protest would impinge on the success of the upcoming Grand Prix in Montreal, any disruption of which would have been a catastrophe for Montreal’s reputation and coffers, Charest finally crafted Bill 78. Once published, the Quebec government’s web servers were promptly hacked; the group Anonymous claimed responsibility.

Negotiations were attempted, but failed, due to hardline strikers’ intransigence

The bill was denounced by bleeding hearts everywhere, including the United Nations. Defiance battened on strong public support, embellished by “concerts de casseroles” — a deafening nightly cacophony of banging pots and pans in east-end Montreal — which spread provincewide, and then across Canadian cities. In August Charest called a general election, banking on support from a “silent majority” to give him a fourth term of office. His gamble failed. Heading up a new minority government, the PQ’s leader, Pauline Marois, cancelled the tuition increase.

According to the 2013 Menard Commission, struck after the election to assess the affair, there were 532 demonstrations, involving 750,000 protesters and more than 34,000 police, between February and September of 2012. Demonstrations were infiltrated by radical elements, such as the fiercely anti-capitalist, masked Black Bloc movement whose typical strategy is to embed itself in larger demonstrations with a view to encouraging mayhem.

After eight months, the protests had to end. The bill was a reasonable compromise in its aim to protect the rights of all concerned parties: students deprived of their education, protesters, police disadvantaged by social-media cat-and-mouse games and economically suffering, tourism-dependent businesses.

Conservatives need not consider themselves hypocrites if they give Jean Charest positive consideration as a leadership candidate. “Baggage”-wise, the Emergencies Act is a steamer trunk, Bill 78 a knapsack.