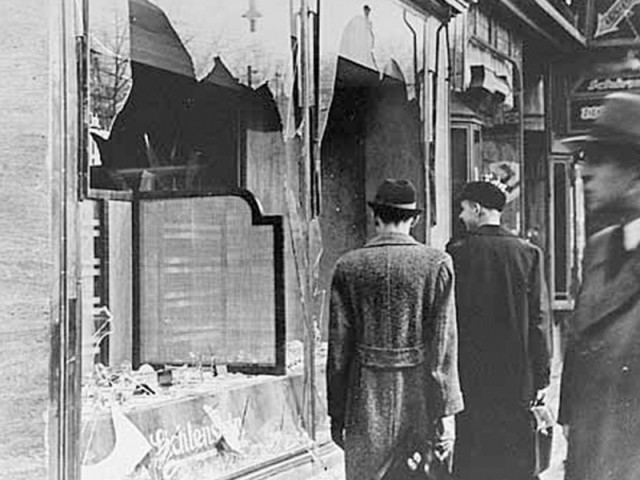 Kay: Anti-Semitism is back in Berlin

We recently commemorated Kristallnacht, history’s most consequential pogrom. The Night of Broken Glass swept Germany over Nov. 9-10, 1938, resulting in 91 deaths, countless other Jews abused and 1,000 synagogues destroyed. Jewish homes and businesses were looted and defiled. More than 30,000 Jewish men were sent to concentration camps. German anti-Semitism was revealed in all its unfiltered virulence, and the then-unobstructed way forward to hell was clear to all with eyes to see.

Here we are, 81 years later, and what do we observe when we look at Germany, or Berlin in particular? We see a city in which past sins are widely and fully acknowledged, but which struggles to suppress the old cancer.

In a paper published by the Begin-Sadat Center for Strategic Studies in October, titled, Berlin: Capital of European Antisemitism, Manfred Gerstenfeld, emeritus chairman of the Jerusalem Center for Public Affairs and an award-winning expert on anti-Semitism and anti-Zionism, lays out the situation with his customary meticulous attention to data-driven evidence.

For years, Gerstenfeld writes, Malmo, Sweden, which has only 500 Jewish citizens, held the dubious distinction as Europe’s capital of anti-Semitism. Violence and acts of intimidation are so frequent there that the Simon Weisenthal Center issued a travel warning to Sweden-bound Jews.

Anti-Semitism in Malmo has not diminished, but Berlin, which has a Jewish population of 40,000, has now surpassed the number of anti-Semitic incidents in Malmo, on a per capita basis. Berlin’s Research and Information Center on Antisemitism recorded 1,083 anti-Semitic incidents in 2018, including dozens of cases of physical aggression, which is up from 951 in 2017. Gerstenfeld says this is but a fraction of the total, with most going unrecorded.

According to Gideon Joffe, the chairman of Berlin’s Jewish community, one-third of the students presently enrolled at Berlin’s Jewish High School are “refugees” from the city’s public schools, where they have been hatefully targeted, principally by Muslim children. At a demonstration in 2017, an Israeli flag was set on fire. In 2019, the graves of Jewish soldiers killed in the First World War were defaced.

The Berlin-Monitor, a publication that studies the views of city residents on current issues, found robust Israel-related anti-Semitism in Berlin. Twenty-eight per cent of inhabitants without a migrant background – largely ethnic Germans, I presume – think Israel’s establishment was a bad idea and 35 per cent regard the behaviour of Israelis as comparable to the Nazis. Of those Berliners with a migrant background, a disconcerting 55 per cent are in accord with those views.

It would be comforting to know that government officials are united and consistent in their concern over, and determination to combat, anti-Semitism. Unfortunately, mixed messages abound. Gerstenfeld notes that Berlin Mayor Michael Mueller has refused to condemn anti-Israel events in the city, and caused further tension by receiving the mayor of Tehran this past summer.

German President Frank-Walter Steinmeier paid a sympathy visit to a rabbi who had been spat on by Muslims on his way home from synagogue, but also congratulated the Iranian regime, whose genocidal hatred of Israel is flagrantly broadcast to the world. Chancellor Angela Merkel is suffused with Holocaust guilt, but apparently didn’t ponder the predictable consequences of welcoming masses of culturally Judeophobic migrants.

I admire Gerstenfeld’s work. His deep dives into the global epidemiology of campus anti-Semitism are extremely useful. Many who work to combat anti-Semitism seem only interested in Jew-hatred emanating from the right. Others focus on Jew-hatred emanating from the Islamic-progressive alliance. Gerstenfeld simply reports the facts. Scholarly neutrality of this kind is invaluable.

On Nov. 30 in Toronto, and on Dec. 1 in Montreal, Manfred Gerstenfeld will be the honoured guest of the Canadian Institute for Jewish Research, speaking on “Establishing Principles and Practical Priorities for the Fight Against Contemporary Antisemitism.” For details, visit Isranet.org.