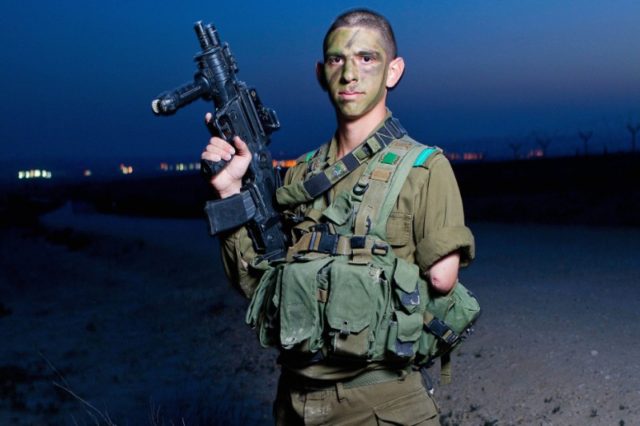 Kay: Jews are finally pushing back

Recently I had the pleasure of meeting Izzy Ezagui, the famous IDF soldier who lost his left arm to a mortar shell in Gaza, yet returned to duty as a reservist. Author of the 2018 book, Disarmed: Unconventional Lessons from the World’s Only One-Armed Special Forces Sharpshooter, Izzy was the keynote speaker at a Hasbara Fellowships event in Toronto, where he addressed a full auditorium of attendees, including many young Hasbara “fellows.”

I was Ezagui’s warm-up act. (I am very glad I did not have to speak after he did, as his wit and charm, applied to a riveting account of his trauma and recovery, made him the proverbial “tough act to follow.”)

Here was a young American Jew who was under no obligation to put his body at the service of the Jewish state. Yet from childhood, Izzy had felt himself drawn to the history of his people. In early adulthood that fascination translated into a wish to participate fully in Israel’s defence. He learned fluent Hebrew in mere months of training, because failure to understand could mean disaster to himself or others. Even after the loss of his dominant arm, and struggling to find a new direction in life, Ezagui and a friend, who were enjoying a beach respite, were able to rescue a girl being swept out to sea.

This unexpected accomplishment encouraged him to press for re-enlistment in his unit. Against all arguments and predictions, he found that, through adaptations and novel strategies, he could fulfil his ambitions and once again become an active contributor to Israel’s strength rather than accept an invalid status. Ezagui refused to allow victimhood to define him, he met adversity with resilience and he chose optimism and action over bitterness and retreat from engagement with further risk.

To me this narrative is emblematic of Jewish history. Ezagui spoke of the tormenting phantom pain he continued to feel in the place where his arm had been. All thinking Jews feel something like that every time we see evidence of anti-Semitism in a news report of anti-Jewish violence or a chilling remark by an influential leader. It triggers memory of the Holocaust, our permanent dismemberment. Almost daily, news of anti-Semitic aggression forces us to choose our response: will we be freighted with fear and bitterness, or with resilience and optimism?

READ: KAY: JEWS, MONEY AND THE GRAIN OF TRUTH BEHIND THE STEREOTYPES

Inspired by his story, I spoke about why I feel, in spite of rampant anti-Semitism, more Jewishly optimistic today than I did 10 years ago.

Israel is strong and prosperous. Ten years ago, it seemed like Israel Apartheid Week and the boycott, divestment and sanctions (BDS) movement would triumph. Today their movement is stalled. Yes, there is anti-Israel commotion on campuses, but they have little support in the public forum. Grassroots pro-Israel groups, that were finding their feet in the early 2000s, are strong on campuses and pushing back hard: Hasbara Fellowships, the AMCHA Initiative, Stand With Us, the Canadian Institute for Jewish Research, the Zioness movement and others. We were on defence in the early 2000s, now we are on offence.

Monitoring groups are doing fantastic work. HonestReporting, NGO Monitor, The Middle East Media Research Institute, The Committee for Accuracy in Middle East Reporting, Palestinian Media Watch and of course UN Watch; their message is powerful and it is heard. The International Holocaust Remembrance Alliance definition of anti-Semitism is accepted worldwide by states and institutions, including the United Kingdom, Canada and Germany, as well as the European parliament.

While there are fewer liberal North American Jews who are Jewishly affiliated and fewer still who are actively Zionist, those who are have been producing the greatest English-language explosion of intellectual and cultural content since ever. Once there was only Commentary, now there is Commentary plus Mosaic Magazine, Tablet Magazine and the Jewish Review of Books: These publications are chock-a-block with rich, proudly Jewish historical and polemical content. Podcasts, conferences, online teaching seminars: It seems strange amidst so much surrounding hatred, but we’re experiencing an intellectual golden age.

In the court of public opinion, where we used to be defendants, we are now the plaintiffs.