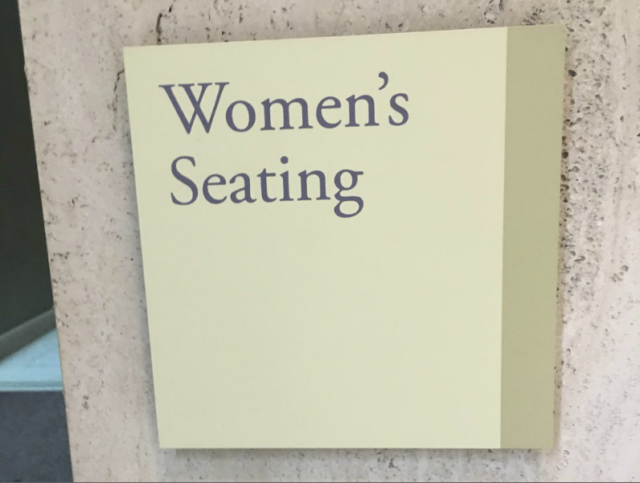 Kay: The view from the balcony

As new members of a modern Orthodox congregation, the experience my husband and I had on the High Holidays this year was a striking departure from the previous 46 in a Reconstructionist synagogue. We’re rather old for such a dramatic change in affiliation, but, having recognized the need for personal Jewish renewal, we took the plunge.

We felt instinctively drawn to Montreal’s Shaar Hashomayim synagogue, the oldest Ashkenazic congregation in Canada (and conveniently located nearby), not least because of the warm friendships we enjoy with some of its longtime active members and our familiarity with its exceptional programming.

As well, through his public appearances and writings, we had come to admire Rabbi Adam Scheier, Shaar Hashomayim’s spiritual leader. Likewise, through her writings and reputation, we gained a deep appreciation for Maharat Rachel Kohl Finegold, the Shaar’s director of education and spiritual enrichment and the first woman in Canada to serve as clergy for an Orthodox synagogue.

I noted two common reactions to my news. My friends who are members at the Shaar said, “You will love the music!” My liberal friends said, “But it’s separate seating,” pronounced with a certain dismay and even incredulity, as though it were impossible that someone accustomed to family seating for so
long could adapt to such a retrograde custom.

My Shaar friends were right about the music. Words can’t convey the soul-stirring beauty of Cantor Gideon Zelemyer and the male choir’s voices (not to mention the heart-swelling children’s choir). But no psychological difficulties at all emerged over the separate seating. Quite the opposite: I liked it. I had, after all, been in such a setting before – but so long ago, I had almost forgotten what it felt like.

From the front row of the balcony, surveying the men’s section, with its serried rows of fully deployed tallitot, and tranquillized by the chanting, I was taken back in time to the High Holidays of my childhood in Toronto, when we accompanied our father to our zayde’s Polish shul. Although much smaller, it too was beautiful, with similar stained-glass windows.

My older sister and I would sit with the women in the balcony, dying of boredom, or play on the front steps with all the other modern grandchildren of ancient men with bushy beards, who could not speak English.

At the Shaar, past and present merged. I quite unexpectedly felt reconnected with my long-dead grandfather, the women in the balcony and, through those same Hebrew prayers, my ancestors. It was, as they say, a “moment.”

I see the value of separate seating. It promotes exactly the sense of cultural timelessness I experienced, creating a mood conducive to wholehearted liturgical response. I also like the way it decouples one’s individual prayer experience from one’s domestic status. When I sit amongst women, I do not know who is single, who is married, who is widowed or who is divorced. Decoupled, we are subliminally bound in sorority.

I saw couples parting ways before entering the sanctuary, exchanging meaningful looks, as if embarking on separate adventures. We felt that way, too. Our reunion after the services was a small gift.

I can almost hear the objection: “But patriarchy!” I dislike that word, because it carries such a reflexively pejorative burden. Judaism is indeed a patriarchal religion, but we should not damn those in the distant past for not assigning the same responsibilities to both sexes at a time when division of labour was the most expedient path to nation-building. Being separate as to function is not the same as being separate as to value.

Liberalized, egalitarian Judaism served me and my family well in our salad days. I cherish warm memories of that community and the friendships that grew from it.

But, now a matriarch, I am attuned to the task of becoming a Jewish ancestor. I need to focus on the bigger picture. To my surprise, I find that picture coming into sharper focus from the women’s section.