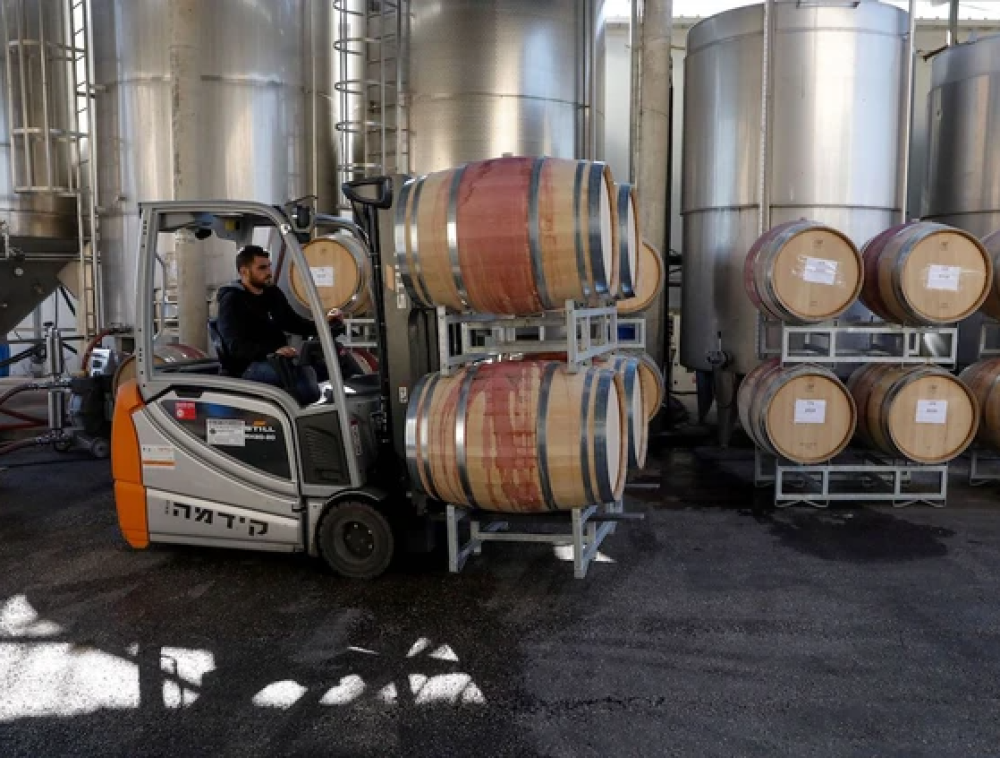 A worker transports barrels of wine at Psagot winery in the Israeli settlement of Psagot adjacent to the Palestinian West Bank city of Ramallah on November 19, 2019. PHOTO BY EMMANUEL DUNAND /AFP

The global movement to delegitimize the 74-year old State of Israel through boycotts, divestment and sanctions (BDS) neither slumbers nor sleeps. Labels on food products have become a favoured instrument for such economic warfare. On Thursday, two lawyers filed a complaint with the Canadian Food Inspection Agency over olive oils labelled “Product of Palestine,” which is inconsistent with country of origin labelling, and not held to the CFIA’s own standards, as applied to Israel.

A prior case dealt with wine. The wines of Psagot Winery, produced in a Jewish town in the West Bank a mile north of Jerusalem, carry the labels “Product of Israel.” This labelling was challenged at CFIA by an anti-Israel activist in 2020, who argued their label should say “Occupied Palestinian Territories” rather than “Israel.” The CFIA first agreed with the complainant, then almost immediately reversed its decision.

In May, after a saga of legal back-and-forth, the CFIA ruled that Psagot Winery can keep the “Product of Israel” label, so long as it adds clarifying information indicating that the wines are produced in a region administered by the State of Israel. Under the Oslo Accords, Israel has jurisdiction over the Jewish settlements, including where the wine was produced. Canadian law recognizes that jurisdiction. In the U.S., such products are simply labelled “Made in Israel.”

This contrasts sharply with a 2019 decision issued by the Court of Justice of the European Union, which banned “Made in Israel” labeling for any goods produced beyond Israel’s pre-1967 borders, including the Old City of Jerusalem.

Many critics have described the ruling as discriminatory and even antisemitic, given that there are over 200 ongoing territorial disputes in the world — from Crimea to Kashmir to Western Sahara  — with no other administering countries are not constrained in this way. For example, wine from Nagorno-Karabakh is labelled in Europe as a “Product of Armenia,” the country that controls much of the region, even though it is regarded as occupied Azerbaijani territory. If a food product is exported from the Falkland Islands, a British Overseas Territory still known in Argentina as the Malvinas, it can still be labelled “Product of the UK.”

The U.S. State Department deemed the E.U.’s special labelling requirement for Jewish communities “suggestive of anti-Israel bias,” adding, “This requirement serves only to encourage, facilitate, and promote boycotts, divestments, and sanctions (BDS) against Israel.” Eugene Kontorovich, professor at George Mason University’s Antonin Scalia Law School and director of the Center for the Middle East and International Law, said the European court was “putting a new kind of yellow star on Jewish-made products.” Brooke Goldstein, Canadian-Israeli founder and executive director of the New York-based Lawfare Project, which funds legal actions to challenge anti-Semitism, said, “”The (European) Court’s decision is discriminatory on its face; goods produced by Jewish people and Muslim people in the same region will have different labels because of political decisions made by European officials. Mandating an ethnic and religious element to labelling products is a dangerous precedent.”

Goldstein and Kontorovich are determined that Israeli products be treated by the same standards as others. They are the lawyers who filed a complaint with the CFIA regarding olive oils labelled as made in “Palestine.” The label of one, Al’Ard Extra virgin olive oil, seen in an Ottawa Marché Adonis shop, says “Product of Palestine.” The label of the other, Zatoun Fair Trade Extra Virgin Olive Oil, which retails at the Nuthouse in Toronto (as of June 1), and doubtless elsewhere in its network (Zatoun did not respond to my media query), describes the oil as being “from Palestine,” and displays the flag of the Palestinian Authority. Its Country of Origin (CO) is stated as “Product of West Bank PS,” although the West Bank is not a country, and PS is an ISO abbreviation for “State of Palestine,” which Canada does not recognize as a country.

The complaint rests primarily on the Safe Food for Canadians Act, which requires that all food products must be labelled in ways that are not “false,” “misleading” or “likely to create an erroneous impression,” reinforcing its claim with the precedent set by the CFIA’s Psagot ruling.

In the legal analysis attached to the complaint, they note that not only is the “State of Palestine” a nonexistent entity unrecognized by Canada, the government of Canada had voted against a United Nations General Assembly resolution claiming there was such a state. Moreover, Canada’s labelling regulations require that the CO be either a country or a World Trade Organization member, which includes non-sovereign customs territories like Hong Kong. Israel is both. “Palestine” is neither.

As in the Psagot case, in which they acted for the winery, Goldstein and Kontorovich are open to a reasonable solution. They demur from the proposed approach recently entertained by the Liquor Control Board of Ontario to label such wine products “of the West Bank,” since the West Bank is “neither a country, nor a customs entity, nor a governmental authority of any kind.” In any case, “West Bank” is a misleading label because, as prescribed by the Oslo Accords, the West Bank is divided into three Areas: A and B are under the Palestinian Authority, and Israel controls C. The complainants suggest a model which designates the relevant administering authority, such as “Product of Palestinian Authority – West Bank,” or the even more clarifying “PA administered territory.”

Consumer confusion is not the issue here. The complainants stipulate that both Psagot wine and the Palestinian olive oils are marketed almost exclusively to people who know the origins of the products, and who purchase them expressly as a gesture of support. They have no problem with Palestinian activists providing support vehicles for their sympathizers. They do not seek any advantage for products made in Israel, inclusive of those areas Israel administers. They are asking only that — unlike in the EU — the CFIA continue to recuse itself from the internal political conflicts of other nations, and stick to their mandate of providing the same level regulatory playing field for all. A reasonable demand, objective observers would agree.