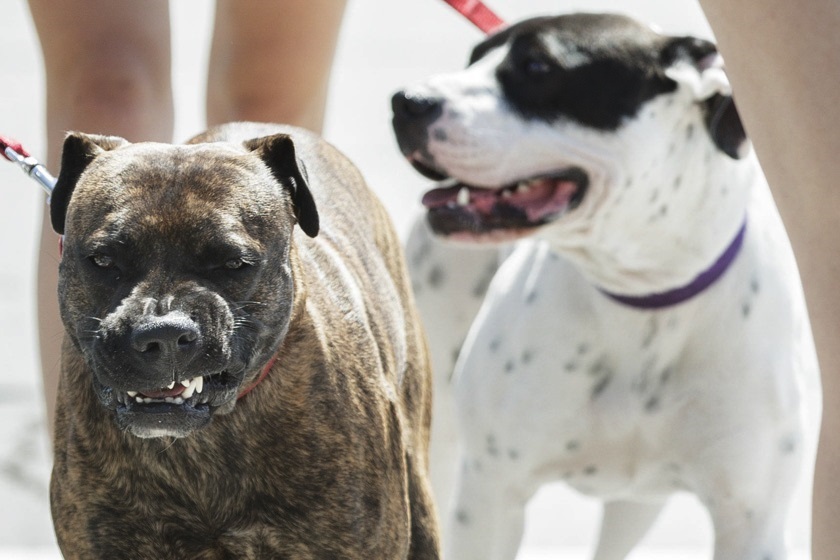 (This fall Montreal became the latest jurisdiction in Canada to legislate a ban on pit bulls. But the local chapter of the Society for the Prevention of Cruelty to Animals, backed by advocates and owners of pit bulls and related breeds that were targeted in the bylaw, argued that the ban was overly broad. Last month they convinced a judge to suspend parts of the bylaw, including the ban.)

There are presently about 350,000 pit bulls in Canada. Until the 1980s there would have been almost none, since unlike the United States, with a population of about four million pit bulls today, Canada has no history of dog fighting.

In fact, pit bulls were still exceedingly rare in Canada, and their characteristic behaviour practically unknown, when, in June of 1997, seven-year-old Sharon Reynolds of Kingston, Ontario, was killed by a pit bull. Her mother Louise was wrongly charged in the case, because the now-infamously disgraced Dr. Charles Randal Smith, head pediatric forensic pathologist at Toronto’s Hospital for Sick Children from 1982 to 2003, concluded that the 80 bite wounds on the child’s body were scissor stabs.

Eighty wounds! No other breed of dog inflicts this kind of damage on either animals or humans. And to be fair even to Dr. Smith, at the time many animal control officers, especially Canadians, had not seen maulings of such severity. Now surgeons not only recognize and distinguish between pit bull damage and that of other dogs, they have had to invent new kinds of surgery to deal with the typical hold-and-rend bites of pit bulls, which lacerate flesh to the bone.

A disproportionate number of human pit bull victims are children under the age of ten. Pit bulls are also responsible for over 95 percent of dogbite-related domestic animal fatalities, far more numerous than human victims. A mark of their fearlessness and bloodlust is that pit bulls are the only breed that will attack (and often kill) horses and cows.

Some pit bulls implicated in attacks on animals and people belong to anti-social thugs who identify with their pet’s deserved reputation for unstoppable aggression. But most belong to naive, ordinary people who have bought the pit bull advocacy movement mantra that “raised right,” pit bulls do not present any greater threat to other animals and people than other breeds. Which is why about a third of all pit bulls end up in animal shelters, dumped by overwhelmed owners who have been mugged by genetic reality.

Because of the extraordinary disparity between their actual numbers and the percentage of serious injuries and fatalities for which they are responsible, pit bulls and their derivatives are banned in 700 North American jurisdictions, all U.S. military bases, and partially or wholly in 40 different countries.

Where they are banned, “bite rates” do not necessarily go down. This is a red herring on which pit bull advocates lovingly feast. But “bites” are not the purpose of breed-selective legislation (BSL); rather the point is the eradication of fatalities and the prevention of grave injury, especially to children. This, we know from credible studies, is exactly what happens when BSL is imposed.

Demonstrators gather in Montreal on July 16, 2016 to protest against the proposed breed-specific ban on pit bull dogs after a series of high profile attacks. (Image: Dario Ayala)

Domesticated animals are not supposed to present a pattern of risk. The contract that evolved over the centuries between humans and dogs was based in mutual benefit: food and shelter for the animals in return for services, and eventually companionship. Random acts of minor aggression under provocation have traditionally been considered a tolerable social price for the pleasures and utility of dog ownership. But what is happening with the rise of pit bull popularity is neither random nor minor.

Why? As humane-movement historian and publisher of Animals24-7.org Merritt Clifton has written: “It is important to understand that nature never created any dog analogous to a pit bull. No street dog resembles a pit bull, nor does any other breed which was not very selectively bred to be capable of fighting, dismembering escaped slaves, and holding livestock by the nose while their throats are cut.”

Since pit bulls were not bred to fulfill the traditional contract – that is, since they were bred as crude entertainment for the masses, not as companion animals performing anodyne services – they display a demonstrably predictable behavioural pattern of elevated risk to other animals and humans that no other breed comes close to matching. Pit bulls in the U.S. kill a human being about once every 14 days, and maul or disfigure hundreds every week. Indeed, a Maryland court has concluded that “it is no longer necessary to prove that [a] particular pit bull or pit bulls are dangerous.”

The pit bull advocacy movement, well-organized, well-funded and relentless (a Netherlands judge likened the movement’s penchant for intimidating whistle-blowers to organized crime) is a unique phenomenon in the history of the humane movement. Organized activism on behalf of fighting dogs represents the first time in the history of human-animal relations that a movement has formed, not to promote the well-known virtues of a beloved breed, but to promote denial of a beloved breed’s well-known vices.

Their mission is apparently to lower the threshold of what is considered acceptable canine behaviour and to banalize severity of harm. To this end they have successfully constructed an environment of “canine correctness” that pervades the entire institutional dog world: humane shelters, veterinary associations, kennel clubs and animal-control agencies.

(Calgary’s former Animal Services Director Bill Bruce is a pit bull advocate, and a disgraceful degree of conflict of interest in the Quebec Order of Medical Veterinarians (OVMQ) was recently “outed” by a La Presse investigative reporter, forcing a public apology by their president. The OVMQ were caught in flagrante delicto, but all veterinary associations today toe the “multicaninism” party line on pit bulls.)

Although living creatures, dogs are consumer products, and should be subjected to the same criteria for public safety as any other property. Artificially constructed breeds do not have the inherent “right” to be propagated. As for owners’ rights: they have the right to own a dog, not a dangerous dog. With 400 breeds to choose from, most of which have never been implicated in an attack on humans, anyone who can still only love a pit bull clearly does not love dogs.