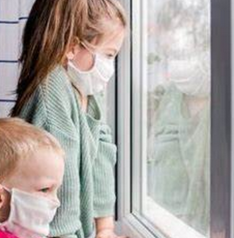 Mask mandates for children have no basis in science

Starting March 8, all Quebec students in grades 1 to 6 will be required to wear a mask at all times in the classroom and on school transport.

At about this time last year, I was fretting to a friend about the paucity of medical masks available, and the difficulty of getting hold of cloth ones. My friend thought I was over-reacting. The government isn't telling us to wear masks, she said. They're even saying masks are ineffective and counter-productive. I remember my exact words to her: "Government policy accords with the scarcity of resources. Masks are in short supply, and they don't want us to panic. Mark my words, when there are sufficient masks for everyone, they will tell us they are mandatory." She scoffed, and we bet a bottle of wine over it. (Yes: and it was a very nice sauvignon blanc.)

Masks are tolerable for short periods of time, but disgusting after a while, especially in warm weather. Adults who are forced to wear them all day for their work tell me they get used to them. It's hard for me to imagine. I'm not anxiety-prone in general, but even after an hour masked, I can't wait to feel real air on my face. So I am troubled by the draconian masking rules coming into effect in a few days for all Quebec children age six and up, in the Montreal Metropolitan Community.

Masking "creep," even as the case numbers are coming down in Montreal, is a little—well, creepy. When the case numbers were higher than they are today, kids only had to wear masks in the corridors, but not in their classrooms, if desks were socially distanced, and younger children were exempt from masking. Now, starting Mar 8, all students in grades 1 to 6 in primary schools, both public and private, will be required to wear a mask at all times in the classroom and on school transport. Procedural medical masks will be supplied by the government—two a day per student.

The impetus for the new rules seems to be overblown fear related to new variants of the virus. Two cases of the South African variant were discovered in far northern Quebec weeks ago, but the "outbreak" was stemmed, and no further cases reported. And Montreal scientists seem confident of their ability to handle the DNA sequencing to stay on top of the variant situation. Quebec has two well-equipped labs in addition to a government lab, and all of them are ready to step up quickly, according to professor Ioannis Ragoussis, head of genome sciences at the McGill Genome Centre.

Moreover, the variants do not seem to affect children. An article published in the science journal Nature in late January observed that: "Children are no more susceptible to these [variants] than adults are — and closing schools on the basis of incomplete information could have repercussions"; "[We] still don't really know how much schools and children actually contribute to spread"; and—according to one researcher—"children might always be less susceptible than adults to an infection that uses the ACE2 receptor."

The school masking edict does not appear to be temporary. Masking will be obligatory for summer camps, and likely into the new school year. Young kids running around in the heat masked most of the day sounds like cruel and unusual punishment to me. But even wearing them all day in classrooms is hard. The 13-year old son of a friend told his mother many kids he is at school with are experiencing difficulties breathing as the moisture and sweat builds up. He speaks of headaches, panic attacks and constant reminders to mask, mask, mask. He even described a child nearly passing out, which prompted the school to reverse the no-cell-phone-in-class policy so that children could call their parents if they felt panicky or faint.

One Montreal parent, a longtime skeptic of masks for children, decided to find out if there was any hard evidence—studies, data, reports—to support the new rules. Ilan Avsker and his wife live in the Notre Dame de Grace area of Montreal, where their young children attend a local public elementary school. They both consider the new rules downright abusive to children, and are angry that there was no consultation about it with parents. The announcement was, suspiciously, sprung on parents at the last minute before spring break but, Avsker notes, the policy had to have been formulated some time ago in order to procure the massive number of masks needed for enforcement.

Avsker has done a deep dive into the mask literature, such as it is, and what he has discovered, he informs me, is that, even after searching since last June, "there have been no safety studies conducted to determine the effects of long-term mask wearing in children. Nowhere have studies been conducted that followed groups of children, collated in various age categories, who were masked for many hours a day, many weeks [or months] a year." And so, we simply do not know the risks of a one-size-fits-all solution.

By now, anyone who follows pandemic-related news on even the most basic level is aware that adult-to-adult and adult-to-child transmission of the virus is common, but child-to-adult is uncommon. Sweden is the only major Western country that has kept schools open for kids 15 and younger throughout the pandemic, with no masks or mass testing.

As of September, there were no Covid-19 deaths among 1.8 million children attending day care or school. Moreover, teachers did not have an excess infection risk compared with the average of other professions. Emerging research such as a study on the incidence of COVID-19 in 12 million (!) adults in the UK, compared adults living with children to adults without, and unsurprisingly confirmed what most parents already know: their children aren't killing them from COVID-19. In fact, this study found that adults living with children aged 0-11 did not have an increased risk of infection with COVID-19, while at the same time enjoying a reduced incidence of death from the virus.

But we don't have to go as far as the UK to see the lack of danger that children pose to parents and teachers. Just looking at data from our very own Quebec COVID-19 information site, INSPQ (table 2.8, referenced on February 26, 2021), for a time period that represents just over a year (the charts start at February 24, 2020), we see the following statistics:

These numbers represent those adults who were healthy at the time of infection, as well as those with co-morbidities. The extrapolated documented number of relatively healthy 20-59 year olds that died of COVID-19 in the span of an entire year is 35. Epidemiologically speaking, that is not a sufficient number on which to base a sweeping mask measure, unless accompanied by sufficient data to indicate the probability of deaths would be reduced to near zero with the constant masking. But there is no such data. For all we know, the same 35 people would have died even if their children were wearing masks 24 hours a day. Were any of those healthy adults who died teachers? (Teachers who are at risk because of age or health issues are not required to teach in the classroom.) We don't even know that. But it would probably have made the headlines if it happened.

From the evidence we do have, there is nothing to suggest that children are a more than a nugatory risk to other children, to their teachers and to their parents. It seems to Avsker—and I agree—that "the burden of proof lies with those who implement these policies; the onus is on them to prove unequivocally that masks are helpful while completely and unequivocally safe for young children, with still developing bodies and minds."

It is manifestly clear to everyone that this pandemic overwhelmingly attacks the aged and the already infirm. The elderly are being vaccinated at a rapid clip already. There is no apparent reason that children should be bearing the burden of ramped-up health measures at a time when the danger of infection is diminishing. A cynic might entertain the idea that the measure is a sop to the teachers' union, which is considering strike action after a year of negotiations in which a spokesperson for the Fedération autonome des ensignements (FAE), which represents 49,000 teachers at pre-school, elementary, secondary and vocational training levels, said, "we did not succeed in settling anything." If so, it would not be the first time children's well-being was sacrificed on the altar of adults' political interests.

Resistance is mounting. Longtime journalist Éric Duhaime, who is running for the leadership of the Conservative party of Quebec, has initiated a petition, titled (translated from French) "NO to obligatory masks for elementary students." Amongst the list of reasons for the petitions cited: the number of new COVID cases in Quebec is in continuous decline; the threat of new virus variants is diminishing; Quebec children are suffering from lack of socialization; children need to get back into their sports; COVID is "4 to 7 times less lethal than the flu for children;" and pediatricians are demanding relaxation of these measures for children because they are concerned about their development. The petition has garnered almost 24,000 signatures within days of its appearance. There is also a Facebook page dedicated to the issue. I urge parents who are concerned about their children's well-being and rights—to friendship, sport and physical/psychological comfort in school—to lend their support to this campaign.