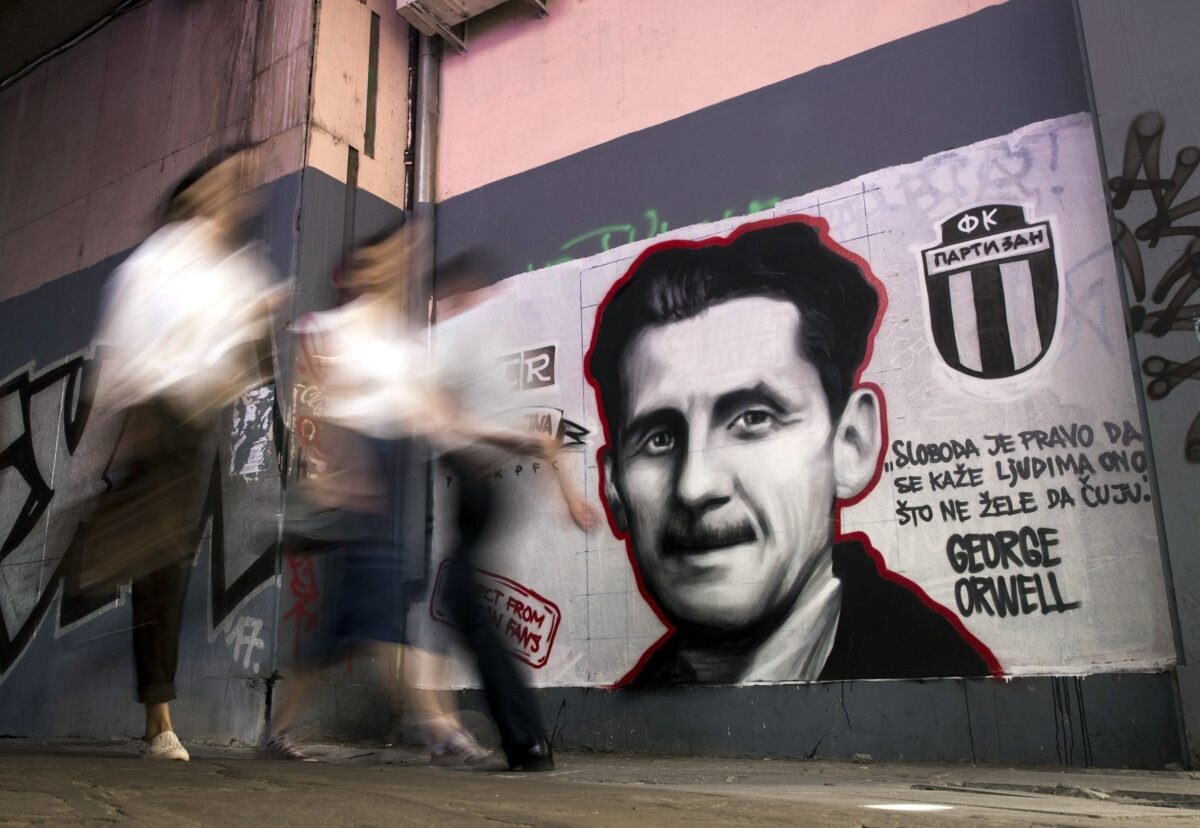 True story. My eight-year-old granddaughter and her mother were working on a jigsaw puzzle, an image of a cat’s face surrounded by black background. We adults were complaining about the difficulty of joining up so many all-black pieces. My granddaughter said, without a shred of irony, “This feels like racism to me.”

Well, her remark felt like “Crimestop” to me. In George Orwell’s dystopian novel “1984,” children absorb the principle of Crimestop, a trope from Newspeak, the totalitarian regime’s language. Crimestop is the abrupt, instinctual, fear-driven self-silencing that precludes utterance of politically incorrect words that may invoke shaming or worse. My granddaughter’s public school teachers have apparently installed a Crimestop-like app in her tender psyche: Just hearing the disembodied word “black” voiced in a mildly negative light triggers rote guilt in her.

This little girl loves hearing and telling stories. If creative writing turns out to be her joy in life, what will she be allowed—or allow herself—to write about? A little tour de l’horizon of entry-level publishing sites for fledgling writers demonstrates that Crimestop is their general governing principle. And Crimestop is the kiss of death to creative writing.

Here, for example, is an excerpt from the submission guidelines of Filling Station magazine in Calgary: “We specifically encourage submissions from creators who identify with female, BIPOC, LGBTQ+, disabled, immigrant, impoverished, survivor, or other marginalized communities. [F]illing Station’s mandate is to publish Canadian experimental literature in all its diversity and would like to promote artists who have been historically underrepresented. We therefore ask that, should you feel comfortable doing so, you disclose your intersectional identities in a cover letter along with your submission. This information is by no means obligatory and will only be used to help us curate a diverse and intersectional magazine.”

The words “diverse and intersectional” pretty well disqualify white writers. And who wouldn’t feel “comfortable” disclosing their intersectional credentials, knowing their colour or LGBTQ status advances their chances of acceptance?

Then there is Minola Review in Toronto. They are “now accepting poetry, fiction, and creative non-fiction from women and non-binary writers.” A letter from the editor explains that she created Minola Review as “a space for us to inhabit our full female selves, to be messy, real, goofy, angry, and bewildered without worrying about censoring for or pandering to the visions and opinions of men.”

Messy? Real? Angry? What happens if a writer’s female character displays these qualities in a story where a man or children are her victims, even if her story is based in fact? I profoundly doubt such a story would see publication as it would “feel like misogyny” to the editor.

Indeed, I think it goes without saying that all accepted material from and about intersectional characters in small presses must eschew negativity lest it “feel like” bigotry. Which doesn’t mean you won’t find elements of bigotry, as long as it is bigotry of the approved kind.

Here for instance is an excerpt from a prizewinning non-fiction piece (by “an Afrolatinx writer and educator”) at Cosmonauts Avenue: “[Y]ou absolutely cannot trust white people. Especially the ones you think you can trust. They don’t know how to love. Or maybe they do, but you’ll never be the one that knows that from experience. Because in order to love you have to give, and when it comes to you, white people will only take. They will take from you until there’s nothing and after that’s over they somehow still will not be done.”

So much for all those people in inter-racial marriages, who might have quite a different story to tell. But this is what passes for prizewinning sentiments among our literary cognoscenti.

Here are the submission guidelines from Vox et liber, a publisher of quarterly novellas that claims to seek “all works from and about underrepresented voices of our population. This includes, but is not limited to, authors that are BIPOC, LGBTQIA+, of any religion, nationality, class, and physical or mental ability. The world needs more diverse voices and we’re hoping to help accomplish that.”

Any religion and nationality? How about a Mizrahi Israeli Jew sharing his lived experience as a victim of Hamas terror? BIPOC? Check. Mizrahi Jews are indigenous to the land of Israel. Diverse? Definitely. He’s brown. Underrepresented? For sure! Check check check. Think Vox et liber would welcome his submission?

Kidding, of course. In asking the question, I’m just messing with readers who may sincerely think they don’t believe in Crimestop, but whose unacknowledged Crimestop app zapped them the instant they read the words “Israeli Jew.”

They know and I know and everyone knows that a brown indigenous Israeli sharing a narrative in which he’s the good guy and a Palestinian is the bad guy—you could throw in gay, non-binary or “questioning” if you like, but it won’t matter—wouldn’t make it into Vox et liber, even if his writing radiates talent of such coruscating brilliance it puts the Song of Songs in the shade.

(In fact, this example is inspired by a real-life cancel-culture story I wrote up last year, and the author in question, Hesh Kestin, is not only gifted but well-established and highly successful. It didn’t help. His small publishing house threw him under the bus.)

To be fair, these tiny publishing houses aren’t cultural leaders; they are followers. They just want to survive in a tough, competitive business. It’s not their fault, I guess, that they have become litmus tests for political correctness. They’re too fragile to resist the Twitter trolls. When even the big mainstream publishing houses cave in to their own woke staffers and the social media mobs, as the Hachette Book Group did earlier this year in cancelling its ready-to-roll-out Woody Allen memoir, who can blame the small ones for denying entry to any writer who doesn’t toe the identity politics party line?

Trouble is, these little presses are the only real hope for unknown but aspiring writers to get a toehold on a writing career. (Yes, anyone can self-publish, but there is no prestige in that, and you aren’t eligible for writing prizes.) In the Snakes and Ladders writing life that is the lot of the average writer, small publishing houses are meant to be the first ladder.

But today, if a young poet, novelist, or short story writer of real talent but with no patience for political correctness—who has deliberately disabled his or her inner Crimestop in order to write authentically looks for that career-launching ladder—well, if it is there at all, it is hidden in a mass of menacing, submission-guidelines snakes.

Barbara Kay was a weekly columnist for the National Post from 2003-2020. Publications she currently writes for include thepostmillennial.com, Canadian Jewish News, Quillette, and The Dorchester Review. She is the author of three books.