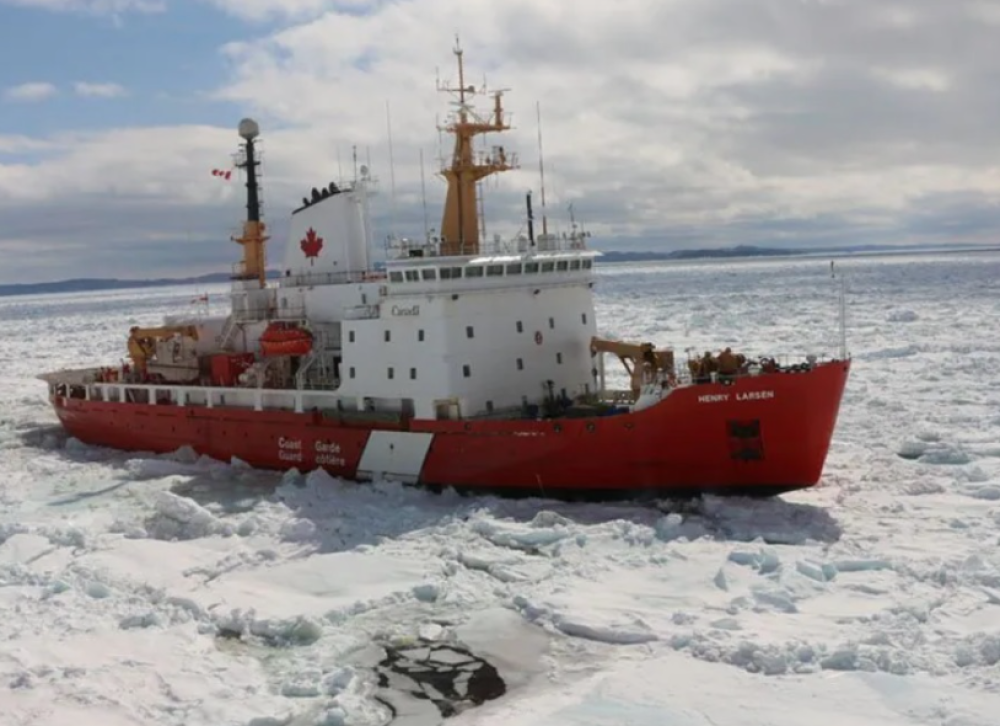 Putin will turn his eyes towards Canada’s Arctic next

“The Kremlin claims a right over the Arctic Ocean’s undersea continental shelf, which contains vast amounts of oil, right up to the 200-nautical-mile exclusion zone around Canada’s Arctic coast”

The ugly war in Ukraine has forced a long-overdue reckoning with the pathetic state of our military. Prime Minister Justin Trudeau offered Ukraine’s President Zelensky “unwavering and steadfast support,” but we don’t have the modern weaponry and matériel to send that will make any meaningful difference in the war.

Don’t be misled by the budget’s promise of an immediate $8 billion on defence as a portal to renewed military preparedness and morale. According to Matt Gurney, the National Post’s military point man, that amount “will only begin to scratch the surface of what’s needed.” With $8 billion, we can repair old equipment, not acquire new. Facilities and infrastructure can be smartened up, but not expanded. We could address personnel shortages, “but not actually grow the military beyond the size it is already supposed to be, yet isn’t.”

Even if the money allotted were virtually unlimited, Gurney says, “the procurement process in this country is such an omnishambles that we wouldn’t spend most of the allotted money because we simply can’t procure stuff.” And on his litany of deficits goes in a most depressing vein. Trudeau said we need “another defence review,” which is nice, but what point of view will inform the review? If it comes from “the mindset that let this [mess] happen in the first place,” it won’t be worth the paper it’s written on.

Military spending isn’t a priority for most Canadians, because we feel protected from threats of war by our fortuitous geography and the wide span of the American eagle’s wings. If history and human nature are reliable standards for judgment, we can be confident Canadians will only stop feeling safe when it is too late to make ourselves safe. It’s already late. What we are witnessing in Ukraine — an entirely unprovoked and ruthless invasion — should be a warning bell about Putin’s pathological need for imperial expansion, ringing so loudly it won’t let us sleep. Because we’re likely next on Russia’s to-do list.

Last spring, Russian Foreign Minister Sergei Lavrov warned Canada and other Western Arctic stakeholders — the US, Norway, Denmark, Finland, and Iceland — that all the resources beneath the ice melting in the Arctic Sea belong to the Russian government. “It has been absolutely clear for everyone for a long time that this is our territory, this is our land,” Lavrov stated at a Moscow press conference. It would be stupid at this point to delude ourselves into believing he is blowing smoke regarding the Arctic as we assumed, for too long, was the case with Ukraine. We should assume he means what he says.

According to a 2021 report by Marcus Kolga of the Macdonald-Laurier Institute, the Kremlin claims a right over the Arctic Ocean’s undersea continental shelf, which contains vast amounts of oil, right up to the 200-nautical-mile exclusion zone around Canada’s Arctic coast. The Kremlin established an Arctic command in 2014 that includes 14 new military airfields and 16 deep-water ports in the far North.  Russia has a range of new “super-weapons,” like the Poseidon 2M39 nuclear-powered long-range stealth torpedo that can deliver a thermonuclear warhead to coastal targets. Putin wants what he wants, and he has the means to get it from us.

In last week’s budget speech, Trudeau committed to strengthening NORAD. When? How? Does Trudeau even understand what the Ukraine war portends for Canada? An English historian, present at the Mar 7 tripartite media appearance in Downing Street of UK Prime Minister Boris Johnson, Mark Rutte, prime minister of the Netherlands and Justin Trudeau, commented in disparaging tones on Trudeau in general — describing our PM as “the gorgeous, pouting, perma-coiffed Canadian premier [sic]” for whom Johnson and Rutte were the “warm-up act,” and in particular for Trudeau’s enthusiastic, but naïve infatuation with RUBIS — the Rules-Based System of International Relations.

The “might is right” doctrine may have governed the way trigger-happy countries with territorial ambitions did business in the past, but in our interdependent, nuke-bristling world, such unenlightened instincts are frowned upon by Trudeau and his fellow naïve globalists. It was RUBIS, Trudeau assured his listeners, that for the 75 years of the United Nations’ existence, has kept the world safe. Now, he noted, the mature and considerate way of solving tensions has been challenged by Putin’s invasion of Ukraine. Well, it was also challenged by the Yugoslav wars of the 1990s, which followed the Soviet model of ruthless onslaught and un-RUBIS-like civilian carnage, but Trudeau was more into the risks of snowboarding than European wars in those days.

The reality is, Russia never signed on to RUBIS. Nor did China or Iran. They all see the concept as a product of Western thought, just like the claims of universal rights that goes with democracy, which they also didn’t sign on to. “Might is right” still looks good to these regimes and we have been fools to pretend otherwise.

Our increasingly woke military honchos are frittering away time and energy, knocking themselves out to achieve gender parity, trying to lure women into combat units — unsuccessfully it turns out, only a handful of women actually want to do the dirty, dangerous work we are seeing in real time in Ukraine. They haven’t noticed that the more armies make themselves appealing to women, the less appealing they make it for men. At the moment, the Canadian Forces are reportedly 7,000 members short of a full complement, and morale is low.

The military only seems to grab the public’s attention during a juicy sex scandal in its ranks. Meanwhile, Putin has taken stock of our leaders’ complacent distraction from matters of actual defence. When Russian forces cross our northern border, what will we do? Will we, in Foreign Affairs Minister Mélanie Joly’s words, “convene” a conference? “Make sure that diplomacy is happening?,” “Convince other countries to do more?”

Our Arctic border is not safe, but we have chosen to believe that our political leaders can be reliably trusted to inform us if and when we should worry about external threats to our sovereignty.  We have frittered away precious time, that should have been spent on responsible defence-building, in moral panics over fossil fuels, “decolonizing” our cultural institutions, gender mysticism and nothing-burger alleged threats to national security by falsely demonized ‘Diesel Deplorables’.

Our political elites have chosen to play teacher’s-pet children in a world where hard men who make their own rules and know nothing of the “right side of history” will determine our fate.

We’re only a “middle-sized power,” Joly says, which may be true, but it doesn’t mean we should throw up our hands and submit to force majeure when it comes, as her attitude implies. Ukraine and Canada are both ranked as “Tier Four” by Military Watch Magazine,” while Russia is “Tier One,” but middle-power Ukraine has had to punch above its weight to survive. If we were backed into that same corner, would we have the will to go to the mat over territory most of us have never seen, and will never see, and never personally miss? Do we have the collective will for it? Is there a game-changing Zelensky on our political horizon?

Discuss amongst yourselves. There will be a test.

Barbara Kay is a senior columnist for Western Standard