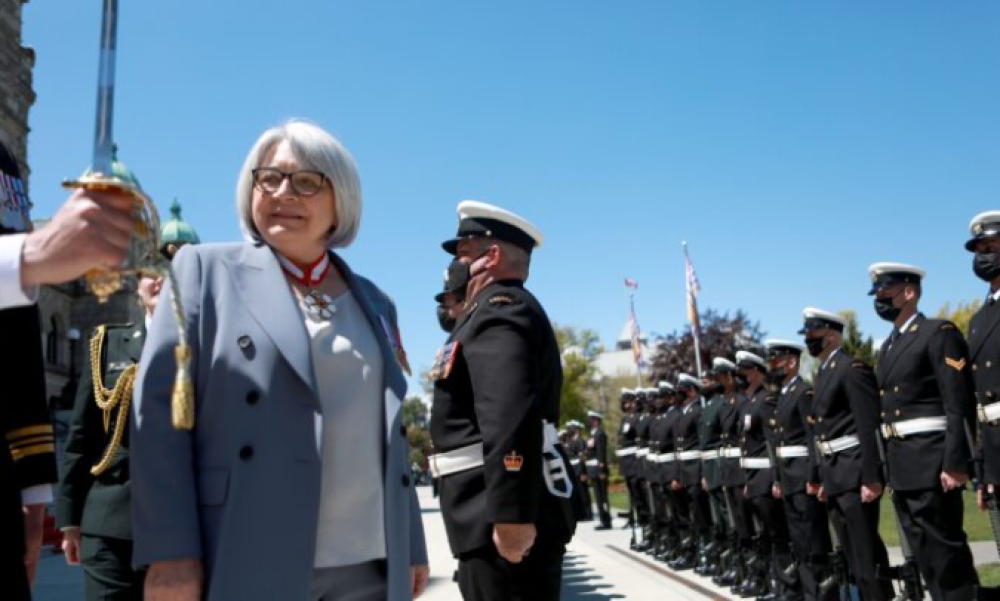 Gov. Gen. Mary Simon inspects members of the Guard of Honour comprised of 50 members of the Maritime Forces Pacific, at the legislature in Victoria, B.C., on May 20, 2022. (The Canadian Press/Chad Hipolito)

The Governor General Is Supposed to Be Above the Political Fray

The Queen’s Platinum Jubilee was both joyous and poignant. At 96, though still in general good health, the occasion’s honouree was herself unable to partake in some of the formal celebrations. But the continuing strength of the British monarchy was embodied in the constant presence of Prince Charles, the heir apparent, and his two successors, William and George.

Apart from reminders by the occasional visits of Royals—these days pomp-less and low key—younger Canadians tend to forget Canada is a constitutional monarchy. New Canadians are more likely to understand Canada’s relationship with the Crown, as their welcome pack states: “We profess our loyalty to a person who represents all Canadians — and not to a document such as a constitution, a banner such as a flag or a geopolitical entity such as a country. It is a remarkably simple yet powerful principle: Canada is personified by the Sovereign just as the Sovereign is personified by Canada.”

Does our governor general “personify” the Queen? The GG is supposed to be, like the Queen, above the political fray since she represents all the Queen’s Canadian subjects. She is meant to be a unifier. But unifying Canada did not factor into the calculation that led to Mary Simon’s appointment. Justin Trudeau chose her through the same identitarian lens as then-prime minister Paul Martin chose Haitian-born québécoise Michaëlle Jean for the role in 2005. Jean, readers may recall, had no record of public service; it was the combination of her race, gender, French fluency, and poignant immigration narrative that dazzled Martin, who hoped Jean would woo hostile Québécois back into the Liberal fold.

Today it is hostile indigenous actors who must be wooed. Mary Simon does have a record of public service, but no more so than many other potential candidates. What dazzled Trudeau was Simon’s race and fluency in Inuktitut. One might argue that it is time for Confederation to recognize indigenous Canadians as full partners in Confederation, but even if we did, Inuktitut is but one of 60 Canadian indigenous languages. Like it or not, English and French remain our two official languages. The Queen speaks good French, and so does Prince Charles. Yet Simon has virtually no French, even though she had access to paid, expert language instruction for decades during which she knew her ambitions might lead to her present position.

Ironically, once appointed, Michaëlle Jean overplayed the French card. One time in Calgary, she gave most of her speech in French. Good optics for Quebecers, an insult to Albertans. Simon has exhibited the same propensity for language games, for example switching between English and Inuktitut at a public event in April, as though Inuktitut were on official par with French. (When apprised of this disingenuous action, the offended mayor of Quebec City, Bruno Marchand, I am reliably informed, refused to meet with her.)

Worse, in late May at Kamloops, B.C., the site of a former residential school where ground-penetrating radar found soil disturbances potentially indicative of graves, Simon waded into charged political waters. At an event marking the one-year anniversary of the announcement, Simon eulogized allegedly missing children as if not only evidence of their burial, but evidence of their illicit burial—pure speculation at this point, and highly unlikely to be proved—had been brought to light: “Today, we make ourselves heard across the country. Although it is hard, we are telling Canadians and the world about our wounds and pain,” she said.

“We” and “our” cross the line between neutrality and political participation. Nobody is denying that the residential schools’ history is riddled with evidence-based, troubling stories of abuse, but the alleged Kamloops story isn’t (yet) one of them. In fact, the “discovery” of the “missing children’s” graves in Kamloops is the most highly contested point of departure for debate in recent Canadian history. On one side, oral history. On the other, credentialled scholars and responsible journalists who have investigated the Kamloops illicit-burial narrative in good faith. But the latter have been falsely accused of residential-school denialism by militant indigenous issues’ activists, media allies, and even by Minister for Crown-Indigenous Relations Marc Miller, who tweeted allegations of a “ghoulish demand to see corpses” and “denialism.” The GG’s open alignment with plaintiffs in a so-far unadjudicated case is an abuse of office, guaranteed to stoke indigenous bitterness and delay reconciliation.

Given the importance of the residential-schools issue over the past few years, it was a given that, following Julie Payette’s ignominious departure, the new GG would be indigenous. Well and good. But since we have now had several female GGs, there was no pressing need for the role to be filled by a woman. It’s not as if there weren’t better indigenous choices. Russ Mirasty, current lieutenant governor of Saskatchewan, for just one example, speaks English, French, and Cree. As chief superintendent of the RCMP in Saskatchewan, Mirasty was the force’s highest-ranking indigenous Canadian. According to a reliable source, “The man understands the Crown and cares about it and loves the vice-regal role. He wears a morning suit with moccasins, so he gets how you can respectfully blend traditions.”

Instead, we have a charmless and aloof GG, who is reportedly even more grudging of her time on active duty than Payette. She is also unfortunately served by a weak secretary, Ian McCowan, a Privy Council Office minion who knows little of the vice-regal role but is surrounded by equally partisan PCO-recruited staff who treat the GG office as subordinate to government, rather than as mandated—distinct and independent.

For the Jubilee, Gov. Gen. Mary Simon was naturally in London representing Canada at the formal ceremonies. To mark the occasion for us, she made a short video in which she spoke of growing up in Northern Quebec where her grandmother “would show us pictures of the Queen … revered in the Arctic, since the relationship between the Crown and Indigenous Peoples is considered sacred.”

And for good reason. Indigenous land claims only have legitimacy insofar as the Crown, with whom they were negotiated, has legitimacy. Thus, indications of a little more reverence for this “sacred” institution and a little more emulation of the Queen’s storied dedication to duty and service to her subjects—in good times or bad, in circumstances pleasantly stimulating or numbingly tedious, presiding over, but never politicizing ceremonies—would be appropriate even in a governor general who sees her first duty as a servant to her own people’s interests.