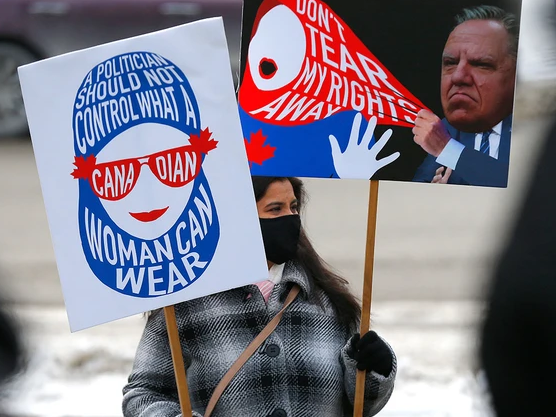 A woman takes part in a protest against Quebec's Bill 21, outside Calgary city hall on Dec. 19, 2021. Photo by Darren Makowichuk/Postmedia News

The high priests of woke hijack the hijab debate

Quebec’s Bill 21, which proscribes visible religious symbols in many public-sector jobs — popular with Quebec francophones, unpopular with Quebec and Canadian anglophones — was passed in 2019, but it wasn’t until October that a test case emerged in the public school system. In an act of civil disobedience abetted by Bill 21-dissenting school administrators, substitute teacher Fatemeh Anvari, who wears the hijab, was assigned to a homeroom Grade 3 class at Chelsea Elementary School.

When Anvari was duly removed from the classroom (and assigned elsewhere, not fired), it seemed to come as a great shock to many anglo commentators that the government had actually enforced its own law. So the incident sparked yet another round of condemnation of the law as “discriminatory,” which is objectively true, and “Islamophobic,” which it is not, since the law discriminates against all visible religious symbols. Objectively, one can only say that the law discriminates in favour of strict secularism and against all religious messaging from anyone in a “position of authority.”

Anvari is relying on her freedom-of-religion right for public sympathy. But she complicated matters by admitting that she does not wear her hijab as a “positive Islamic duty,” but rather on “identity” grounds, for “reasons of resistance.” The hijab is for Anvari, then, a political statement, something comparable to the keffiyeh, a form of sartorial lamination, which has become for Palestinian activists and their political allies a de rigueur statement of resistance to Israel’s presence in the Middle East.

The law discriminates in favour of strict secularism

If it is not a perceived religious obligation, but a personal sense of “identity” that is at stake, then that rather muddies the waters of indignation swirling around Anvari’s Charter rights. The Charter was written by people who understood religion in its traditional sense. They did not foresee the emergence of our era’s deity-indifferent, but evangelizing belief system — often referred to as woke — whose dogmas of cultural relativism, gender fluidity, original white sin and intersectionality have colonized our legislative, cultural and pedagogical institutions, as well as set the rules for public discourse.

Political identity is therefore now treated with the same reverence — more, actually — than affiliation with brick-and-mortar religion. So our intelligentsia doesn’t really care whether Fatemeh Anvari wears the hijab as a Muslim, or as a political activist. Once the magic word “identity” came into play, it was considered Islamophobic to suggest that the hijab is different from the cross, the kippah or the turban, which signify traditional religious affiliation — period.

But — eppur si muove — the hijab is different. Loose modesty scarves of individual design are common to many ancient cultures. But the standardized, head-binding hijab came into use as a tool of political Islam with the 1979 Revolution in Iran. Before the Ayatollah Khomeini came to power, Iranian women dressed as they pleased. After, women — and soon girls — were obliged to wear the hijab as a sign of Islamist triumphalism and female submission to patriarchal behaviour codes considered retrograde in the West. As my colleague Rupa Subramanya recently noted in these pages: “It’s deeply ironic to those of us who know first-hand the plight of women in the Islamic world, that some in the West view the wearing of the hijab as a symbol of freedom.”

In the days when I was occasionally invited as a guest commentator on woke’s house organ, the CBC, I was once permitted to defend my approval — unique to my knowledge amongst anglo columnists — of a ban on face coverings in public-sector services. My oft-stated position is that face cover is not a religious obligation, but an antisocial, misogynistic cultural practice Canadians should not even passively endorse with our taxes. The host countered that she had welcomed several Muslim women on air who assured her they wore the niqab by choice, and could choose not to as they pleased, and what did I say to that?

Stunned by her naiveté, I charged her (politely) with selection bias toward political actors: Did she seriously believe, I asked, that any woman who was forced to wear the niqab would also feel free to come forward publicly with that information? Had she forgotten Toronto teenager Aqsa Parvez, who in 2007 was killed by family members for choosing Western ways of self-presentation, her refusal to wear the hijab being particularly contentious?

How many more potential Aqsas wear the hijab from fear, not choice? We will never know, so long as the high priests of woke control the discourse. Even in 2007, the willed ignorance on violence against women and girls in the name of family or national “honour” was shocking. Most journalists persisted in calling such crimes examples of extreme “domestic violence,” whose sociological profile is radically different from Aqsa’s story, and chided as bigots any objective journalists who insisted on the cultural specificity of honour killings.

How many more potential Aqsas wear the hijab from fear, not choice?

Since then, our Islamosplaining secular pundits have doubled down on their condemnation of those who insist on the hijab difference. To refer publicly to the hijab as a troubling practice is not permitted — even when imposed on children incapable of informed consent. Recently Dr. Sherif Emil, a pediatric surgeon at the Montreal Children’s Hospital, responded to a Canadian Medical Association Journal cover featuring a little girl wearing a hijab with a letter to the editor, in which he protested the journal’s exploitation of a “symbol of oppression” to promote diversity and inclusion. Both Emil and the CMAJ editor were mobbed on Twitter. Pressured by Muslim activists and their allies, the editor apologized fulsomely and withdrew the letter. To his credit, Emil stuck to his guns .

There are Canadian girls who will sadly never know in their lifetime the feeling of the wind in their hair. But they are holy children in woke circles. Readers interested in courageous Muslim women’s “lived experience” — so precious in other minority branding — that belies the misleading narrative of hijab innocence, can find them online under hashtag #FreeFromHijab.