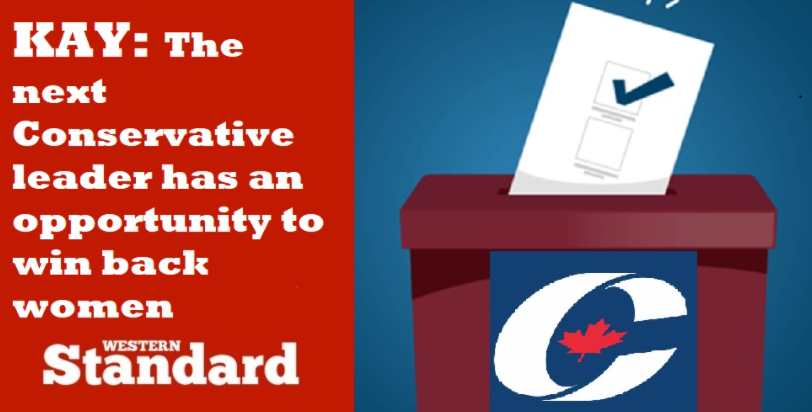 The next Conservative leader has an opportunity to win back women

“The big message has to be ‘Inclusion is a wonderful goal, but inclusion cannot trump fairness and safety for girls and women.’”

It’s too early for me to declare for a favourite in the upcoming federal Conservative leadership campaign, although I will say I’m sorry Rona Ambrose remains a non-starter. But there are some interesting possibilities. I do admire the grit and optimism of those who are willing to enter the fray. Conservatives are a tough herd of cats to corral, and there is no pleasing everyone.

One thing we know to be the kiss of death is to promise what you have no intention of delivering. To borrow a hideous trope conceived by the Trudeau government — in terms of “deliverology” — allow me to present some a few talking points for candidates to ponder that, in my opinion, could lead to promises that are not only “deliverable,” but that all Canadian conservatives and a critical number of liberals can unite behind.

The Tories won’t win an election unless they win the trust of a lot more women voters. According to a June 2020 Ekos poll, among men, voting intentions are tied, but among women, Liberal support is double that for the CPC, with 47% for the Liberals and only 23% for the Conservatives. Similarly, a June 2020 Leger poll found a statistical tie between the Liberals and Conservatives among men, but a decisive 20-point Liberal lead among women.

So, it’s pretty clear the Conservatives have their work cut out for them with women. Closing that gap by just a few points could make the difference in the next election. Appealing to women should be a priority in a new leader’s messaging.

Oh, I know what you’re thinking. ‘We’ve tried! But we can’t make inroads with them, because they’re convinced our real agenda is to ban abortion and rescind gay marriage! To which I say: Forget about abortion and gay marriage; both are old news on the women’s front. It’s a Brave New World out there gender-wise and hiding in plain sight, politically speaking, is undefended virgin gender terrain that’s yours for the taking.

You know the old saying, ‘The Revolution eats its children.’ Well, that is exactly what has happened to old-school feminists for whom abortion and gay rights sucked up all the political oxygen. The trans revolution is swallowing them whole. Or rather half of them. The movement is badly split between feminists who have signed on to trans ideology, and those known as “gender criticals,” who realize hardline trans ideology is not friendly to women, not even the slightest bit. In fact, quite the opposite. There’s a reason #WomenErasure keeps trending on Twitter.

The ‘gender criticals’ are voting fruit ripe for the picking, and so are the hundreds of thousands of women who support them, but who  — apart from a few brave counter-revolutionary souls — are too afraid of being labelled transphobic to say so out loud. But they are fuming inside. And Justin Trudeau — eager as ever to dance to the tune of the latest iteration of the gender ideologues, and too dumb to notice the latest iteration is a betrayal of the feminism he supported when it was the cool kid on the block — is just begging for a defenestration by a gallant leader of the opposition on behalf of the women he has thrown under the bus.

All of the women in the cabinet, in most of the mainstream media, and in various government agencies, drank the trans ideology Kool-Aid, and are happily aligned with a government that used to define itself as feminist — i.e. actually standing up for real women’s rights — but is now treating actual women as handmaidens to the Great Gender Reset.

The dissident gender criticals are old-school feminists who — whatever silly other things they believe — still understand a woman is an adult human female, and not a man who “feels” like a woman. You don’t hear much from them because they’ve been cancelled, de-platformed, threatened and abused on social media (one trans-woman athlete, often called upon by media as an “expert,” tweeted that gender criticals who opposed him competing in women’s sport should “die in a grease fire.”)

You wouldn’t know it from the Twitter wars, but Twitter is not representative of mainstream life and thinking. I can assure you gender-critical views reflect those of most non-ideological ordinary women, who do not believe biology is a “social construct” and are not thrilled to see male bodies colonizing spaces created for women.

There are three trans-rights policy areas that are all guided by the trans activists’ holy principle of “inclusion” that simply cry out for effective pushback: sports, prisons, and other spaces in which women are emotionally or physically vulnerable (such as rape crisis centres and locker rooms), and gender ideology in education and therapeutic treatment of gender dysphoria.

Sport is a fairness issue, and fully covered in the book Unsporting.com, by principal author, coach Linda Blade and me. Single-sex private spaces is a safety issue (especially prisons); and often-harmful indoctrination of children, supported by the therapeutic professions, is a parents-rights issue. What they have in common is a hypothesis about gender fluidity that is completely untethered from science. So, basically, a leader who pushes back against them would be defending science. Something Trudeau keeps telling us to do with regard to the pandemic, despite his own reckless disregard for the evidence.

It’s a damn shame the Tories caved in on Bill 6 (“the conversion therapy” bill that criminalizes any therapeutic approach to gender dysphoria other than “affirmation” — that would have been a great hill to stand and deliver on.) The bill went beyond banning discredited, old-school practices we can all agree were barbaric, to ban even health counseling. We can be sympathetic to the needs of gender dysphoric children to be accommodated in class and society, but that need not happen at the expense of other children.

The big message has to be: “Inclusion is a wonderful goal, but inclusion cannot trump fairness and safety for girls and women.”

Remind this government they promised a gender-based analysis (GBA) would be included as part of every new piece of legislation. That did not happen for Bill C-16, informally known as the “Transgender Rights Bill,” but is imposed on bills that have little to nothing to do with gender, such as energy legislation.

In my opinion, this is a critical window of opportunity for the Conservatives to make its bid for women’s support. The steamrollering of women’s sex-based rights through legislative consequences flowing from our compelled assent to the Orwellian absurdity of the declaration “trans-women are women” was always in the cards. That’s why the hard-line trans activists assault the “gender criticals” who dissent with such vitriol, calling them TERFS (Trans-exclusionary Radical Feminist), and label everything they say as hate speech. Every new piece of legislation entrenching trans rights digs a deeper hole for girls and women to climb out from.

I urge all the leadership candidates, and those thinking about throwing their hats into the ring, to take up this opportunity. The shrieks of fury from the ideologues will be disconcerting. Trudeau will be leading the pack of transphobia-baying hounds. But if you refuse to rise to the bait and stay on message, there is potential here for a massive harvest of women’s votes, and huge embarrassment for Trudeau, because he has backed himself into a corner on this file he can’t get out of.

Here is your mantra: “We defend science; we defend social inclusion for all Canadians, but will not compromise fairness and safety to others; we defend girls’ and womens’ Charter sex-based rights; we defend parents’ rights in education and medical interventions; we defend everyone’s freedom of speech to discuss and debate these subjects with civility and mutual respect in the public forum without fear of punishment.”

The beauty of this platform is that it will also appeal to all conservatives and all libertarians and with the added bonus that it will not alienate any male voters, in fact, it may attract some new ones.

Stake your claim to this neglected, but fertile territory. Make these promises. Don’t waver. That’s my pitch. If any of you think you have a better shot at attracting the women’s vote, I’m all ears.

Barbara Kay is a Senior Columnist for the Western Standard.