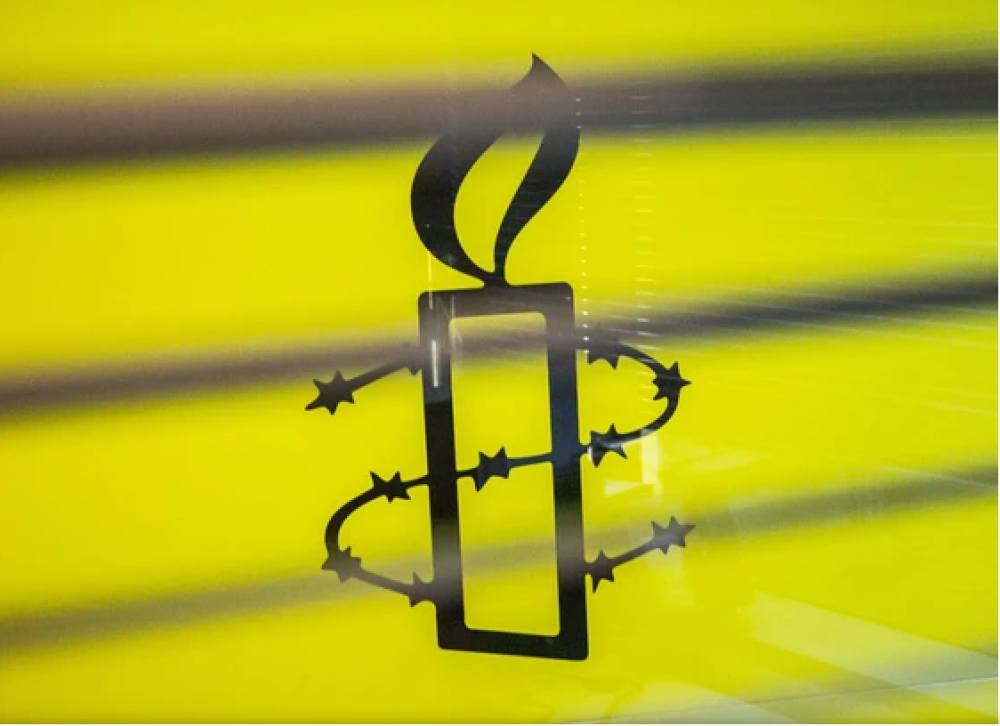 The Amnesty International logo is seen in its office in Hong Kong in 2021. PHOTO BY ISAAC LAWRENCE/AFP

The once mighty Amnesty International has sunk to irrelevancy

The organization is rotting from the head down

Created in 1963, Amnesty International’s logo is a work of genius: a sturdy, stylized lit candle encircled by barbed wire, which symbolizes the ancient proverb, “Better to light a candle than to curse the darkness.” The mission and the logo supported each other in harmony for decades. Yet sadly, the candle seems to be melting. You can see wax droplets running down its side. But no, on closer inspection, that’s not wax; it’s flop sweat.

In 2019, a report on systemic bullying at Amnesty International United Kingdom (AIUK) was inspired by two workplace harassment-related suicides. That was the thin end of a much wider wedge, which was revealed last month by the management consultancy firm Global HPO in a 106-page document arising from a comprehensive independent investigation into AIUK’s problematic internal culture.

Fully accepted by Amnesty International, the report accuses AIUK and Amnesty’s international secretariat of: institutional and systemic racism; a bullying culture; the presence of a white saviour and colonialist complex; the purposeful screening-out of applicants of African origin; and other racist behaviours.

How the mighty hath fallen. I was a university student in 1961, when Amnesty International (AI) came into being, and I can well remember the galvanizing effect on my cohort of its simple but hugely effective strategy for bringing world attention to political prisoners, or “prisoners of conscience,” as AI calls them.

Its campaigns personified oppression’s evils. We saw the prisoners’ haggard faces. We learned their names. Their stories moved us to participate in the AI remedy — thousands of ordinary individuals writing variations on the same theme in clear, short letters to the oppressor governments, asking that the punishment stop — a tactic that was elegant in its simplicity, and frequently effective.

AI beneficiaries include such famous protesters against oppression as South Africa’s Nelson Mandela and Russia’s much-persecuted opposition leader and anti-corruption activist, Alexei Navalny. It can truly be said that thousands of prisoners have been spared detention or death through the good offices of AI.

Throughout the 1960s and ’70s, AI took wing, evolving into a global network, which, by 1977, was comprised of 1,874 groups in 33 countries. AI initiated the first global campaign against the use of torture by armed forces, which was commonly accepted as necessary at the time, but now, thanks to AI, resolutions against torture have been signed by more than 150 countries.

AI raised awareness of prisoners in Latin American dictatorships. It crusaded for the abolition of the death penalty. Appropriately, for its battle against state-sponsored torture, AI was awarded a Nobel Prize in 1977. It seemed as though AI would keep going strong forever, with a multi-million dollar budget gleaned from millions of small donors like me, as well as huge government grants.

In the ’80s, AI fought political killings and forced disappearances, and at the end of the decade, it took on the issue of refugees around the world. In the ’90s, it was uncovering atrocities in East Timor, Rwanda and the former Yugoslavia. In the 2000s, its focus turned to economic and social injustices resulting from globalization.

I can’t remember the exact date, now decades ago, that I cancelled my monthly donation to AI Canada, only that it was due to AI’s rabid obsession with Israel, and its continual harping on the fallacious trope of Israel as an “apartheid” state.

AI’s “researchers” on the Israel file have a record of anti-Israel activism and make no effort to hide it. For years, the “halo” effect of its past integrity protected AI from being criticized about its extreme bias on this front, but none of the charity’s disproportionate focus on Israel went unnoticed by NGO Monitor.

In a 2015 monograph, NGO Monitor detailed Amnesty’s “financial mismanagement; repeated examples of ‘lawfare’; systematic flaws in the reporting of human rights abuses; limited understanding of armed conflict leading to erroneous claims and incorrect analysis; and violation of the universality of human rights, including a consistent institutionalized bias against Israel through double-standards.”

Suffice to say that many of Richard Gladstone’s allegations against Israel in his own infamous report on the 2014 Hamas-Israel conflict — which he later publicly repudiated — were “based upon false claims proffered by Amnesty.”

There is no law that human rights organizations must exist in perpetuity. AI has done great work, and continues to do good work, but once a charity’s reputation for consistent integrity has been deeply contaminated in one area, as AI’s has, it has lost the moral high ground it once commanded.

In any case, the world has moved on, and AI is no longer needed. Scores of NGOs now inhabit the human rights terrain that AI tilled. The internet offers more revelations on human rights abuse in a day than AI once did in a year.

Sixty years ago, AI’s literal prisoners of conscience languished in filthy prisons or suffered torture for their courage in defying tyranny. By painful contrast, in 2020, along with other equally unsound NGOs, Amnesty Ireland signed a letter urging politicians to “no longer provide legitimate representation” to women holding “critical” views on gender ideology, which the letter equates with “bigoted beliefs that are aligned with far right ideologies.”

In my youth, I was buoyed by AI’s heroic defence of the right of South African dissidents to protest their lack of political representation. In my old age, I am horrified to witness AI calling for the removal of political-representation rights from gender-ideology dissidents. AI Ireland has clearly lost the plot. But limbs take their cue from the brain. This organism is rotting from the head down.