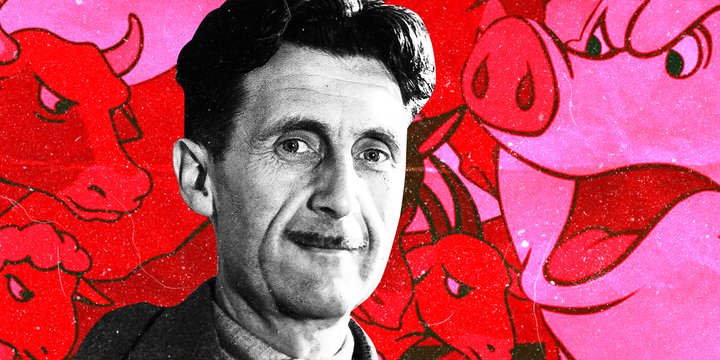 The way they teach Orwell in Canada is Orwellian

All writers enjoying respect and popularity in their lifetimes entertain the hope that their work will outlive them. The true mark of a writer’s enduring influence is the adjectification of his (sorry, but it usually is “his”)—name. An especially jolly Christmas scene is said to be “Dickensian.” A cryptically written story is “Hemingwayesque.” A corrupted legal process gives rise to a “Kafkaesque” nightmare for the falsely accused. A ruthless politician takes a “Machiavellian” approach to besting his rival.

But the greatest of these is “Orwellian.” This is a modifier that The New York Times has declared “the most widely used adjective derived from the name of a modern writer … It’s more common than ‘Kafkaesque,’ ‘Hemingwayesque’ and ‘Dickensian’ put together. It even noses out the rival political reproach ‘Machiavellian’, which had a 500-year head start.”

Orwell changed the way we think about the world. For most of us, the word Orwellian is synonymous with either totalitarianism itself or the mindset that is eager to employ totalitarian methods—notably the bowdlerization or suppression of speech and freedoms—as a hedge against popular challenge to a politically correct vision of society dictated by a small cadre of elites.

Indeed, it was thanks to Orwell’s books—forbidden, acquired by stealth and owned at peril—that many freedom fighters suffering under repressive regimes, found the inspiration to carry on their struggle. In his memoir, Adiós Havana, for example, Cuban dissident Andrew J. Memoir wrote, “Books such as … George Orwell’s Animal Farm and 1984 became clandestine bestsellers, for they depicted in minute detail the communist methodology of taking over a nation. These […] books did more to open the eyes of the blind, including mine, than any other form of expression.”

Animal Farm and 1984 are therefore invaluable to young students who are learning their national history and in particular, the spectacular cataclysms of the 20th century that came about as a direct result of totalitarianism on the far right and the far left.  Their inclusion was uncontested until recently. A few weeks ago I wrote about a school board in Ontario that had decided, “as a response to TRC [Truth and Reconciliation Commission] calls for action,” to jettison its literary program that had featured giants like Shakespeare and Orwell in order to fill the curriculum with indigenous stories.

This does students a terrible cultural disservice. There’s nothing wrong with non-indigenous students learning about indigenous culture—but they should not be learning at the expense of their own aesthetic and intellectual heritage, which opens young minds to the creeds, principles and events that bind us as a nation.

Collectively those ideas are contained under the umbrella of “liberal democracy,” a set of beliefs and assumptions featuring equality under the law for everyone and the sanctity of individual freedoms. Liberal democracy has, for many decades, suffered setbacks under the rising hegemony of “postmodern” theories and Marxism-based ideologies, headquartered in academia. The new mindset—encapsulated by Orwell’s  “some are more equal than others”—has encouraged a state of “velvet totalitarianism” in virtually all university communities.

Indeed, as College Fix editor Daniel Payne pointed out in a recent Wall Street Journal op ed on campus speech repression, the university environment today is reminiscent of Animal Farm, where “no one dared to speak his mind, when fierce, growling dogs roamed everywhere, and when you had to watch your comrades torn to pieces after confessing to shocking crimes.”

But now that I have seen a certain set of teachers’ guidelines to teaching Animal Farm in Grade 10, I am reminded of the old adage, “Be careful what you wish for.” In arguing for the retention of Animal Farm on the high school curriculum, it had not occurred to me that the lessons drawn from it in 2019 would be different from the lessons traditionally drawn—that is to say, the lessons Orwell himself wished to be drawn from it.

Orwell is, however, a dead white European male, and therefore what he intended his book to be no longer carries moral weight—or any weight at all—with educators moulded in a post-truth era. The British Columbia Teachers Union (BCTU) is a case in point. According to their two-page lesson plan for Animal Farm, the students will:

Poor old “I will work harder” Boxer, perhaps my all-time most memorable literary character. Symbol of “labour” and “working people,” is it? Is “labour” terminally naïve, dim-witted and completely lacking in critical thinking ability? Is “labour” credulous to the point of self-sacrifice? Are “working people” unable to tell the difference between democracy and tyranny?

Of course, Boxer is lovable because he is child-like. He stirs pity in us, but also agitation and distress. He is the strongest animal on the farm, yet he demonstrates to us that physical strength is no use if he who possesses it does not recognize his own oppression and challenge his oppressors, but in fact willingly submits to it (“Napoleon is always right”).

Nowhere in the lesson plan is Boxer alluded to as those in the working class who are exploited by the rich, but who are as well the collateral damage of Marxist ideology and its most disastrous reification in the Soviet Union. In fact suggested “Activities” include the telling of stories—all local —about union strikers in B.C.’s mines, woodworking and Fisherman’s unions who were beaten up or who “died under strange circumstances” (like Boxer, you see). A student with no knowledge of Communism’s terrible history would infer from this lesson plan that “working people” are a monolithic class, and everywhere oppressed in exactly the same way, even though, of the examples of anti-union violence offered in the Activities section, none occurred later than 1937. The word “Soviet” does not appear anywhere in the BCTU notes.

And yet, as Orwell made clear in his preface to the Ukrainian edition of Animal Farm, the book was written with a clear purpose:

On my return from Spain I thought of exposing the Soviet myth in a story that could be easily understood by almost anyone and which could be easily translated into other languages. However, the actual details of the story did not come to me for some time until one day (I was then living in a small village) I saw a little boy, perhaps ten years old, driving a huge cart-horse along a narrow path, whipping it whenever it tried to turn. It struck me that if only such animals became aware of their strength we should have no power over them, and that men exploit animals in much the same way as the rich exploit the proletariat.

Orwell is respected by both liberals and conservatives precisely because he was even-handed in his criticism of unfettered capitalism and Marxism. He was a socialist himself, but wrote in the same preface, “for the past ten years I have been convinced that the destruction of the Soviet myth was essential if we wanted a revival of the Socialist movement.”

Withdrawing Orwell’s Animal Farm from the high school curriculum is a form of pedagogical neglect. Laundering the novel’s message to serve as a propaganda tool for ideologues is an abuse of power. Orwell cannot object to this contamination of his legacy. Are B.C. parents satisfied to be “Boxer,” or will they become “aware of their strength” and demand justice for Orwell?