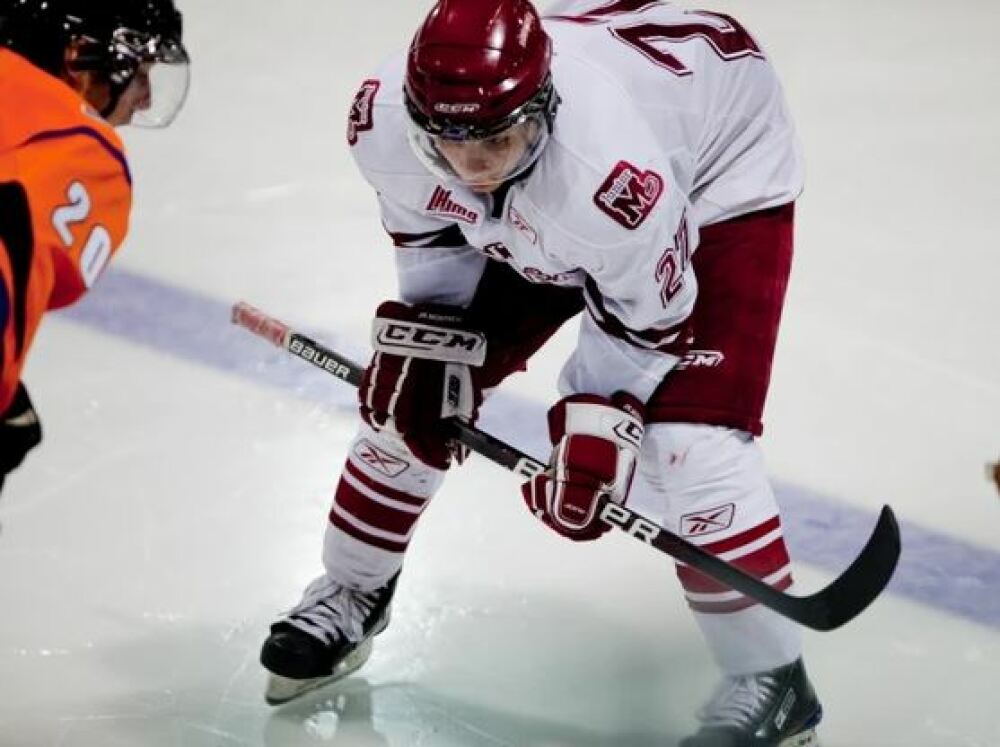 Eliezer Sherbatov faces off during a preseason game featuring the Montreal Juniors against the Gatineau Olympique at the Cynthia Coull Arena in Greenfield Park, Que., in 2010. PHOTO BY MARCO CAMPANOZZI/THE GAZETTE

'Tis the season for a heartwarming hockey tale

Eliezer Sherbatov is something of a legend in Quebec, and now I understand why

It’s that time of year. My faithful readers deserve a break from my indignation about the sorry state of the world. So do I. We all need uplift, and I found plenty in the slim and fast-paced memoir reviewed below. It’s categorized as a young adult hockey memoir, but as an old adult who isn’t a hockey fan, I promise there’s a lot more than hockey going on in this hero’s journey.

“My Left Skate: The Extraordinary Story of Eliezer Sherbatov” is written by Anna Rosner, a Toronto-based educator who spent hundreds of hours interviewing Sherbatov, but chose to write the book as a first-person narrative from the protagonist’s point of view. Sherbatov is something of a legend in Quebec, and now I understand why.

Eliezer Sherbatov begins Chapter 1, appropriately, with an homage to his mother, Anna, who is “the strongest person I know.” After all, there would be no story of Sherbatov without his mother’s central role in it.

Both Anna and Alexei Sherbatov, Eliezer’s father, grew up in Soviet Moscow. Alexei Sherbatov’s family’s refusal to abandon their Jewish identity makes them targets of suspicion. At 15, Anna’s figure skating ambitions are curtailed (cheap skates were crippling her feet). The couple are united by antisemitism and a love of hockey. Alexei Sherbatov is careful to cheer for the Russians, “but quietly admired Guy Lafleur of the Montreal Canadiens.”

Married with two sons and yearning to breathe free, the Sherbatovs emigrate to Israel, where Eliezer is born in 1991. Suddenly, it’s the Iraq War, and Saddam Hussein’s missiles are falling uncomfortably close by for 37 days. Nyet. They want peace, but not heat. Guy Lafleur’s snowy home beckons.

Alexei Sherbatov’s Russian education is no use to him in Montreal. He gets a job boxing pizzas. As soon as he’s saved enough money, he buys his wife good-quality figure skates. Floating onto the ice after 10 years, it all comes back. She begins coaching kids to power skate, eventually becoming a legend in her own right.

At first, Sherbatov sucks at skating. His father is dubious. Maybe he should follow his older brothers into martial arts (where both will excel)? But his mother won’t hear of it. She takes him in hand. Within a year, Sherbatov is the fastest kid in his hockey cohort. His peers call him the “Russian Rocket.”

Now it’s tournaments and trophies piling up hand over fist. The kid gets noticed in high places. Jean Perron, former coach of the Montreal Canadiens, has been invited to coach the Israeli national hockey team. (What? Israel has a hockey team?) He wants Sherbatov to play for Israel in the 2005 under-18 world hockey championships. Anna Sherbatov laughs. “He’s 13 years … barely five feet tall. They’ll crush him,” she says.

But Perron is serene, saying that, “Israel needs him. Elie will be the fastest kid on the ice.” The youngest-ever player at the under-18 world hockey championship, Sherbatov gets four goals and five assists. Israel wins bronze. (Years later, he joins the Israeli national team to play a pivotal role in winning the gold medal at the Men’s Ice Hockey World Championships in Mexico City, with 15 points in five games.)

He’s triple-A, with a rosy future, except for topping out at only five feet, seven inches. Then, disaster. While rollerblading, Sherbatov falls heavily on loose stones, his left knee taking the brunt — leaking fluid, pressure on a nerve, numbness through the lower leg. A first operation fails. He can’t play. His leg thins out. A second operation fails. “I was a disabled 15-year-old kid, broken like an unwanted toy,” he says.

Hockey is over. He is humiliated, alienated and angry. His only confidante is Somaly, the daughter of Cambodian refugees. She gets him (and has ever since; they’re married with two children). By age 16, he has given up hope. Then, a miracle. The father of one of Anna Sherbatov’s athletes is a famous doctor specializing in knee surgery. The knee gets fixed, but feeling in the lower leg is gone forever.

He limps. How can he skate again? His mother still won’t let him quit. He has eight months to prepare for the 2008-09 season. Anna Sherbatov performs another miracle. “In 10 months, my mother erased those two lost years and found the athlete I had always been,” he says. He finishes the season as one of the triple-A league’s highest scorers in Quebec. He feels “unstoppable.” His team makes it to the Telus Cup on the strength of his winning goal. Triumph! So you know what’s coming next.

He has a shoulder injury and misses games. Worse, he loses confidence. He doesn’t make the NHL draft; 2010 was his last hockey season in Canada. Bummer. But as I said, there’s a lot more than hockey going on in this book.

The sport saga is engaging, but the uplift is the warmth the reader feels from the flame of his parents’ commitment. Where Sherbatov sees a door closing, they’re already directing him to another door opening. Go to Europe, Alexei Sherbatov tells his son, “and make your way to the KHL.” (The Kontinental Hockey League is an international professional ice hockey league founded in 2008, comprising 22 member clubs based in Russia, Belarus, Kazakhstan and China.)

Now his European years begin, and with them come adventures good and bad. Paris, Kazakhstan and ultimately an offer from the KHL team in Slovakia. He plays 35 games for them and never gets paid. Oh well.

Poland invites him to play. Exciting. In a town called Oswiecim. Cool. Wait, isn’t that … yes, it is. Auschwitz. Yes, he plays for them and, proudly, on his Israeli passport. That’s a great chapter. Almost as riveting as the final chapter, where he’s playing for Ukraine, the birthplace of his great-grandfather. And where he’s caught in the war.

Yes, he gets out. It takes four harrowing days. But you’ll have to read the book to find out how. I read “My Left Skate,” captivated, in one sitting, and immediately ordered three more copies for my hockey-playing grandchildren. It’s also available in French.

Happy holidays, everyone. I will return, in my normal state of umbrage, in January.