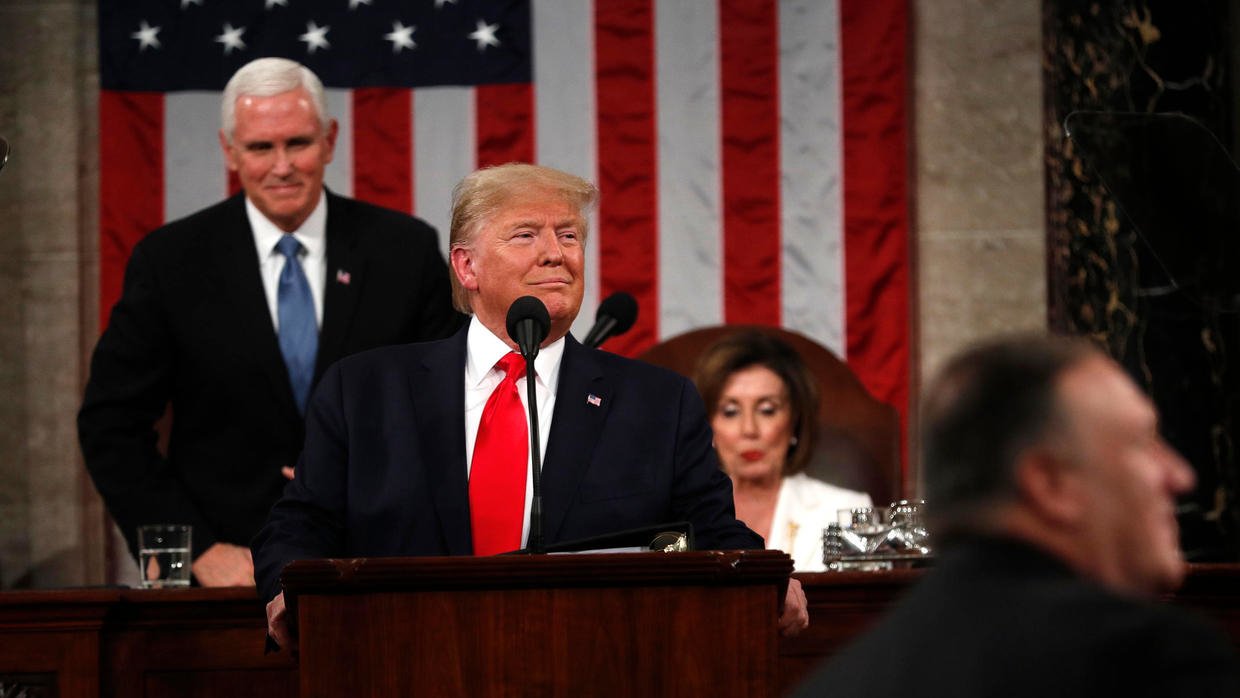 Trump puts on a clinic at State of the Union address

No matter how much you hate President Trump—and I have some world-class Trump haters in my immediate circle of family and friends, so I know how deeply authentic and ferociously visceral that particular hatred is—you have to admit he has some great speech writers.

Amongst the highlights: “The years of economic decay are over…we have shattered the mentality of American decline… our economy is the best it has ever been… Our borders are secure. … We are advancing with unbridled optimism and lifting high our citizens of every race, colour, religion, and creed… 7 million new jobs—5 million more than Government experts projected during the previous administration…unemployment rate under my Administration is lower than any administration in the history of our country…African-American poverty has declined to the lowest rate ever recorded.… women filled 72 percent of all new jobs added.” And so forth.

Whether or not Trump exaggerated his accomplishments, there was enough truth to justify a victory lap, and he did so in soaring, eloquent rhetoric. Of course, he didn’t write the speech, but his direction guided its themes and its mood. The man is in love with the American Dream. Of course, it isn’t a fully recognized dream, and sure, we all knew we were complicit in sentimentality by giving in to the buoyancy of it all, but isn’t extolling a half-recognized dream better than ramming a nightmare down American throats, as has become the habit of the left for more than six decades?

Trump was betting his relentlessly optimistic pitch, not to mention frequent references to God and the sanctity of life, would go down well with his base, especially Evangelical Christians. But he was shrewd enough to reckon—accurately, I believe—that his God-talk and sanctity-of-life allusions would not offend ordinary Americans, who find God-talk perfectly benign, whatever their beliefs, and are appalled by such obscenities as late-term abortion. He might not have gained new votes from the left in tipping his hat to social conservatives, but he may have scored a hit with some normally passive centrists troubled by rapidly disintegrating cultural norms.

His choice of guests—a beautifully diverse group on so many levels, including those beloved of leftists – was inspired, showcasing in their lived experience the ambitions, love of democracy, attitudes to adversity, grace under pressure, belief in redemption, and muscular patriotism that represent American life at its best, even when coping with life at its most challenging:

Also inspired was the decision to award cancer-stricken Rush Limbaugh the Medal of Freedom, presented by Melania Trump. It was an emotional moment for the popular radio host. Limbaugh’s hard-line conservatism may be anathema to liberals, but the smart ones understand that respect is due to the host of the most beloved long-term radio show in the U.S., with an estimated 27 million listeners per week, who may not have very long to live.

Symbols are so important on these occasions, are they not?

Speaking of which, no response to the SOTU address would be complete without a word about House Leader Nancy Pelosi’s unbelievably dumb gesture at the end of the speech. With the camera still steady on a radiantly happy Trump and her, plainly visible behind him, she ripped the pages of his speech in half.

Whatever possessed her? Had she already planned to do it before she arrived? Hard to believe that with time to consider, such a seasoned politician wouldn’t see the obvious danger of unintended consequences inherent in that symbolic act. Or was it Trump’s insulting refusal to shake her proffered hand before the speech that triggered her ill-considered thirst for revenge? Even then, she had a full hour to contemplate the gesture’s attendant risk.

Whatever, Pelosi’s “Nantrum” (thanks, witty tweeter) is the meme that will live in infamy. Trump was wrong to ignore her hand, but that was only an insult to her personally – or perhaps to her party. Tearing up the speech was an insult not only to Trump and Republicans, but to his guests. And in any case, there is no tit-for-tat possible here, because the expression implies that Trump and Pelosi are peers. They are not. He is the duly elected president of the United States. She is a party appointee, not even a candidate for president.

Pelosi does represent her party on such ritual occasions, and if there were some of her colleagues present who thought the tearing was a brave gesture, there had to be others who closed their eyes in mortification. They would be the ones who immediately understood that many Americans, a lot of them undecided, would see the gesture as an offence to the office of the presidency. After all, she had gotten a dig in by refusing to intone the usual introduction with the words “honour” and “privilege,” so she had already riposted the handshake refusal. I’m pretty sure Pelosi handed Trump a significant number of votes with that moment of uncontainable malice.

Never a dull moment in American politics, eh? Even without impeachment dramas, an Iowa primary disaster and a SOTU spat meme gone viral, it’s a circus like no other.