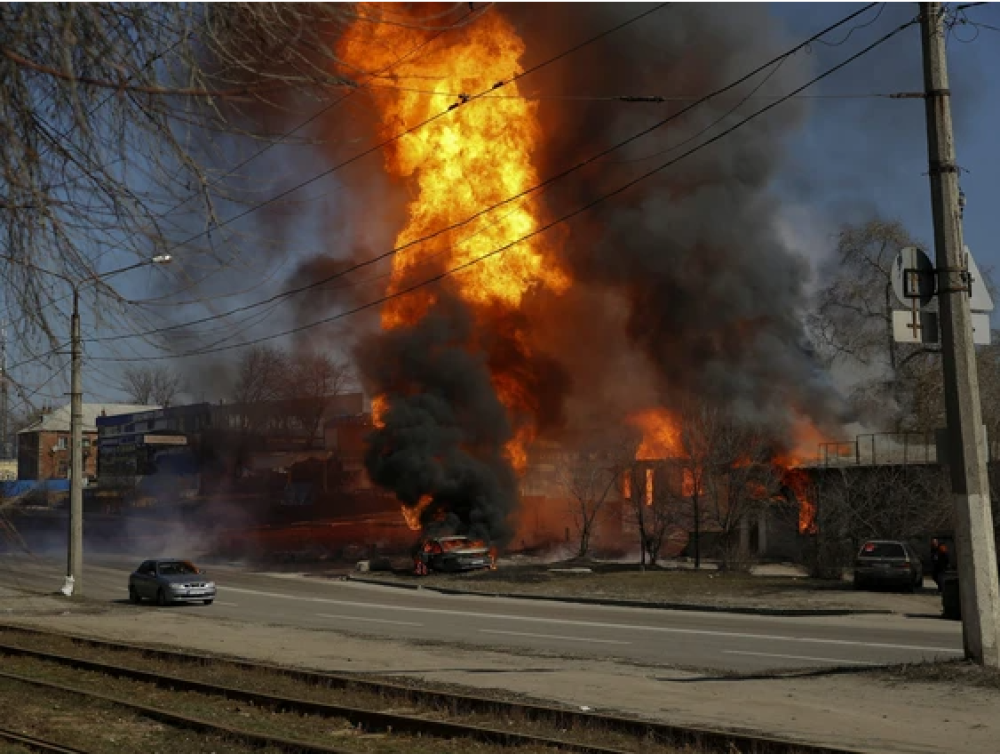 A fire is seen after a shelling, as Russia's attack on Ukraine continues, in Kharkiv, Ukraine March 25, 2022. REUTERS/Oleg Pereverzev

Barbara Kay: Ukraine invasion and the forgotten virtues of duty and honour

At midday on Jan 20 1943, a little girl skipping on the playground of Sandhurst Road School in southeast London waved at what she thought was an RAF bomber. It was a German plane, whose pilot “sliced her down” in a round of machine-gun fire. He then turned and released a 500 kilogram bomb onto the school building, instantly killing 32 children and six staff. Sixty others were injured, some grotesquely. Parents searched the rubble frantically for their missing children.

One survivor (many operations, two leg amputations) told a journalist in later life, “I saw the best and worst of humanity in the war. From the evil of the pilot who set out to kill children, to the nurse who would save the ribbon from chocolate boxes and weave it into our hair, and our headmistress, who visited me and said calmly, ‘That was a nasty day, wasn’t it.’”

A “nasty day.” How English is that understatement?

I did not know about the Sandhurst school bombing until it was brought into the plot of Foyle’s War, a 2002-13 English series, set during and after WWII. I loved it back then and am re-watching it now with even greater appreciation for its production values and writerly intelligence.

Created by the accomplished novelist and screenwriter Anthony Horowitz (Poirot, The Alex Ryder YA series), Foyle’s War recreates England’s home front in the town of Hastings on England’s southern coast with impeccable fidelity to the era’s material and cultural characteristics. Although billed as a mystery series, Foyle’s War was conceived as a portal into the lives of English men and women of all classes — at their best and worst — coping for years with justifiable terror of imminent invasion and the unremitting stress of continual siege by a brutal, amoral enemy.

The central character is widower Det. Chief Supt. Christopher Foyle of the local police, played as the very model of English understatement by Michael Kitchen. The series begins in 1940, with England perilously backfooted by Hitler’s seemingly unstoppable Nazi juggernaut, and ends in season eight with Foyle still solving crimes, but now against a Cold War backdrop.

Foyle is often frustrated in his efforts to solve crimes by war-related political interventions privileging military objectives that conflict with the course of normal criminal justice. Foyle himself would have preferred to contribute to the war effort, but has been denied a transfer. Working alongside him are his faithful driver, “Sam” (Samantha), a vicar’s daughter, whose wholesomeness and stubbornly buoyant optimism provide comic relief, and devoted Sgt. Paul Milner, whose personal war ended early in Trondheim, Norway, where a wound resulted in a leg amputation.

Foyle is old school: none of the foibles, neuroses, drinking problems or distracting sexual entanglements we associate with contemporary sleuths. Stoic, reserved and calm, demanding but fair to subordinates, Foyle is roused to combative frostiness by hypocrisy or cowardice in his superiors. Enormous reserves of sensitivity are hinted at, but sequestered as a default, according to the English horror of “wet” sentimentality. The too-early death of the wife he still grieves for precludes actual happiness, but Foyle finds modest pleasure in fly-fishing and casual friendships.

Every episode contains three interwoven elements: a local murder to solve, a principal character’s personal conflict and a “tutorial” on some aspect of the war. The facts of the Sandhurst school bombing, for example, spill out in the course of a sub-plot in which Foyle’s goddaughter turns up out of the blue one day, alone in the world but for her child, a little boy who has gone mute following his survival of that tragedy.

Foyle’s son Andrew is a fighter pilot, cheating death daily by harrowing inches. The episodes in which he features illuminate the ecstatic highs and wrenching lows of a pilot’s constant exposure to danger, as well as the fierce love of male bonding in war, the wrenching grief in the frequent deaths or maimings of comrades-in-arms, the need to repress the grief in order to keep flying with confidence, and the toll such repression takes on intimate relations with women.

Many commentators have observed — with sorrow and wonderment — that the Ukraine war is taking Europe back to horrors like the Sandhurst Road School bombing they had thought they would never see again. Just as in 1943, the deliberate targeting of children was meant to undermine national morale. The barbaric tactic has had the reverse effect, just as it did in Britain back then.

Duty and honour are old-fashioned concepts in a postmodern world. Or so we believed. But here they are in Ukraine, and we passionately approve of them. Foyle’s War provides the thoughtful viewer with a case for their resurrection as a partial cure for our own nation’s “post-national” malaise.