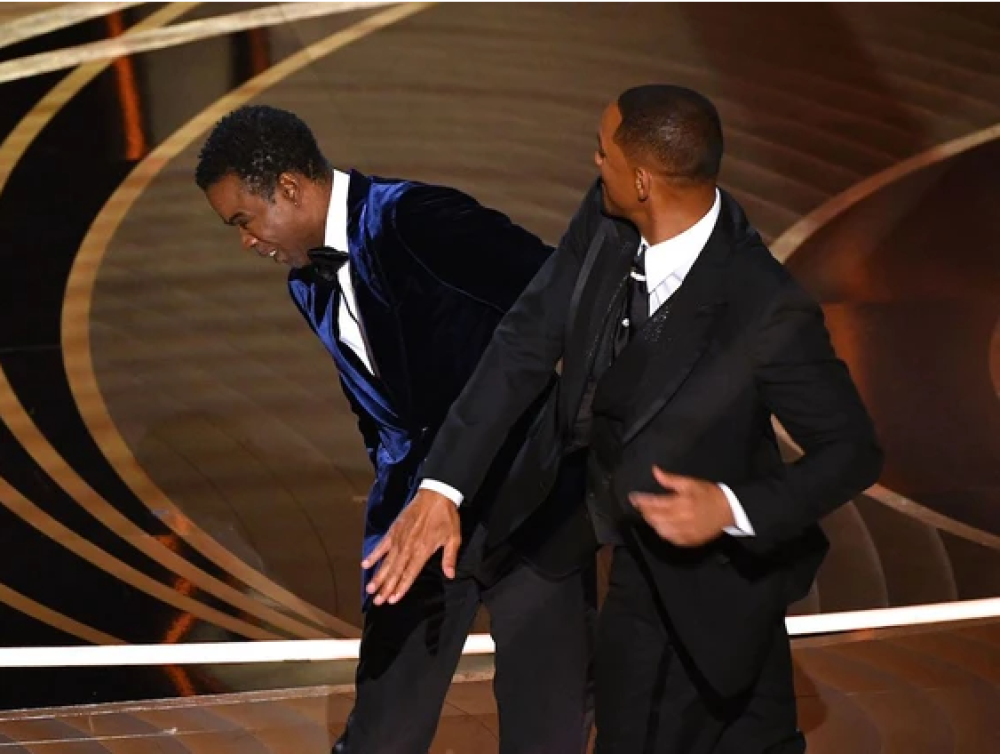 Will Smith (R) slaps US actor Chris Rock onstage during the 94th Oscars at the Dolby Theatre in Hollywood, California on March 27, 2022. (Photo by Robyn Beck / AFP)

Barbara Kay: Will Smith wasn't wrong to smack Chris Rock at the Oscars

I know I’m supposed to qualify my sympathy for Smith by saying he shouldn’t have struck Rock. But I’m okay with it

One of the few TV constants in my life has been watching the Oscars. I never missed them, even when they got preachy. I still wanted to see the gowns. Except for this year. I decided I wasn’t up for another self-righteous sermon on social justice. So I deliberately didn’t watch. It felt liberating. And now of course I am kicking myself.

I missed one of the most electric Oscar moments ever, by now probably viewed about a billion times: actor Will Smith rising from his seat and striding up to the stage in order to smack presenter Chris Rock hard on the side of the face for having made a crude joke about Smith’s wife Jada’s hair, after which he returned to his seat, but continued to attack Rock with profane verbal assaults. Rock handled the tough situation with so much aplomb, quickly remarking, “Oh wow. Wow. Will Smith just smacked the shit out of me,” that it was unclear whether or not the incident was scripted.

It wasn’t. And my sympathy is entirely with Smith.

Rock did something terrible. His allusion to Jada Pinkett Smith’s shaved head, linking her to G.I. Jane — a 1997 film starring actor Demi Moore who voluntarily got a buzz cut for her role as the first woman to undergo training as a Navy Seal — was beyond inappropriate. Jada Pinkett Smith’s baldness is not connected to performance, but to the real-life, ongoing condition of alopecia, a source of particular anguish for women.

So his comparison wasn’t actually about Jada’s lack of hair, as if just a jab at hairstyle. Demi Moore’s hair grew back. It called attention to Jada’s loss of hair. It was pretty damn courageous of her to appear without a wig, and an on stage presenter calling attention to her in a mocking way, in front of her peers and millions of viewers, was about as cruel a “joke” as any I have heard.

I hope nobody is going to go the “freedom of speech” route on this one. This is the Oscars, not open mic at some obscure local comedy club. Presenting at the Oscars is a corporate gig. It is a brand. No matter how schmaltzy or righteous or stupid actors can be, this is their night to come together in celebration of their craft, and to honour excellence in their profession.

At the Oscars, it is the job of those on stage to be funny, but to walk a very bright line in how far he goes. The Oscars ain’t improv. Some basic respect has to be visible under the humour.

There was no respect present here. This was personal. Some commentators harked back to the 2016 Oscars, where Rock, as the host and not just a presenter, had gone after Pinkett Smith who led, with her husband, protests and boycotts because no black performer had been nominated for a major award. The meme #OscarsSoWhite went viral.

Rock savaged the Smiths in his 2016 monologue: “What happened this year? People went crazy. Spike (Lee) went crazy. Jada went crazy. Will went crazy. Everyone went crazy! Jada said she wasn’t coming. I thought, ‘Isn’t she on a television series? ‘ Is Jada going to boycott the Oscars? Jada boycotting the Oscars is like I boycott Rihanna’s panties. I wasn’t invited.” He jabbed again at Jada: “Your man, Will, was not nominated for Truth Hurts. I understand. You’re going crazy. It’s not fair that Will was so good and didn’t get a nomination. It’s also not fair that Will was paid $20 million to make Wild Wild West!”

There have been other hostile encounters on social media. Enmity is hard to disguise. Knowing his bias, the smart decision for Rock would have been to stay away from the Smiths altogether during his routine, and go after people he likes or feels neutral toward. He should also have educated himself on alopecia and its impact on women.

In 2018 Jada described her alopecia diagnosis on her family’s Facebook Watch show, Red Table Talk. She said it was “terrifying” when handfuls of hair fell out in the shower. “It was one of those times in my life where I was literally shaking in fear.” I believe it. Women who have cancer often express more horror about their hair falling out as a side effect of chemotherapy than the cancer itself. The thought of losing my own hair — I’m blessed so far with a healthy thatch — makes me shudder.

I know I’m supposed to qualify my sympathy for Smith by saying he shouldn’t have struck Rock. But I’m okay with it. They are peers. Rock had an advantage over Smith in his on the stage, and he took advantage of it.

It’s ironic that Smith won the Best Actor award for his portrayal, in King Richard, of a father who is fiercely protective of his daughters, as Smith noted in his acceptance speech, in which he also apologized to the Academy — but not Rock — for his action. It’s a father’s job to protect his family from harm. Rock’s low blow doubtless struck Jada just as painfully as a physical blow would have. I believe Smith experienced it vicariously as an actual blow and responded accordingly. In the circumstances, he wasn’t wrong. It was the manly thing to do.

Editor’s note: This column has been updated to reflect Chris Rock’s role as a presenter at the 2022 Oscars and host of the 2016 Oscars.