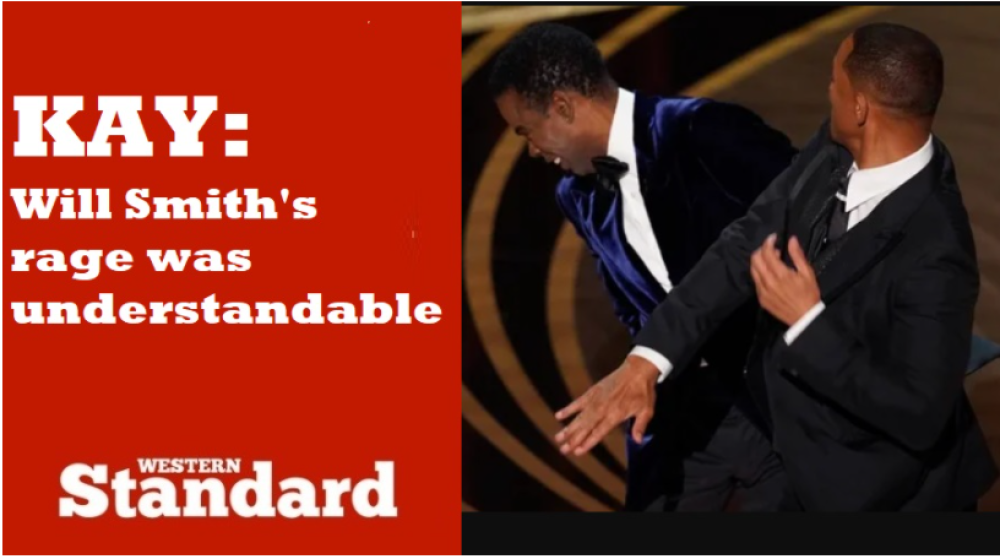 Will Smith’s rage was understandable

“A decent comedian doesn’t use a medical condition for humour.”

During a comedy tour 10 years ago, Quebec comedian Mike Ward mocked a child by the name of Jérémy Gabriel with specific regard to Gabriel’s rare medical condition, Treacher Collins Syndrome, a syndrome that distorts one’s facial features and can cause other deficits, including deafness. (Gabriel had 23 childhood surgeries, and has adequate, but not perfect hearing).

Gabriel had achieved a certain celebrity when he was invited, at the age of 10, to sing for the Pope, so his name was well known to Ward’s audiences. A complaint was made to the Quebec Human rights Tribunal. During the case, Gabriel’s lawyer, Marie Dominique, argued there is a difference between making fun of a public figure and mocking a child with a disability. Dominique stated Ward’s jokes had reinforced stereotypes of people with disabilities, adding the jokes hurt the boy’s confidence and career prospects as well as leading to bullying in school.

Ward appealed. Last October, the Supreme Court of Canada ruled that comedian Mike Ward’s right to free speech trumped Jérémy Gabriel’s right to dignity as defined by the Quebec Charter on Human Rights and Freedoms. Libertarians and many conservatives rejoiced in this win for freedom of speech.

It is commonly understood by those of us who focus a lot of attention on the freedom of speech issue that comedians must certainly be granted significant latitude in their right to poke fun at whatever forms of hypocrisies and social foibles spark their creative instincts. And in theory, I am one of those free speech defenders. In practice, I am disturbed by humour that bounces off the back of disabilities or medical frailties in anyone, never mind a defenseless child. I have no problem with “edgy” humour, but I do have a problem with cruel humour.

Which brings us to the infamous incident at the Oscars on Sunday night, in which presenter Chris Rock made a joke that took off from Jada Pinkett Smith’s shaved head — a consequence of a hair-shedding condition, alopecia, that Jada has publicly described as a source of great personal distress — and ended with Jada’s husband, actor Will Smith, striding up to the stage and smacking Rock across the face. Rock struggled to regain his composure and Smith, still smoldering, yelled profanities to Rock. Everyone and his uncle has an opinion about this, and — asked by my editor at the National Post to express mine quickly — I wrote a column that has resulted in a tsunami of (mostly) negative response (some downright vicious) that has made me feel like public enemy Number One.

The problem with it was I not only expressed sympathy for Smith’s intervention, I condoned it in the circumstances, even calling it the “manly” thing to do. The circumstances were important. I never condone violence per se just because someone feels offended by a joke, but I had the same visceral reaction to Rock’s joke as I had to Mike Ward’s. A decent comedian doesn’t use a medical condition for humour.

The circumstances were these: The incident did not take place in the confines of some grotty comedy club. Jada was at the Oscars, sitting amongst all her peers, and knew she was the cynosure of millions of viewers’ eyes. Rock and Jada have a history of enmity between them. He knew all about her alopecia, and he knew it was something that had caused her deep emotional suffering. Smith at first laughed at the joke, and then realized that it had wounded his wife. He apparently felt her humiliation as if it were a physical blow to her gut. He acted accordingly.

Was it “right?” I guess not. Was it understandable? I think so. Many of my critics said Smith “should have” handled it differently. He “should have” kept his cool and later posted a stern rebuke to Rock on social media. He “should have” sucked it up. Just a joke. He “should have” been rational, calm, mature, etc. Because they are convinced that this was how they would have been in similar circumstances.

They lack imagination in my opinion. Let’s go back to the Ward case. Imagine if those circumstances had been different. Instead of Ward doing his routine at serial venues where only the immediate audience was present and the butt of his jokes were not, let’s imagine Ward’s comedy routine is taking place at the Bell Centre and is being televised to millions of homes. In the audience is not only Gabriel and his parents, but all Gabriel’s schoolmates. Now Ward cracks the actual joke(s):

He describes realizing Gabriel did not have a terminal illness. “I defended him, non-stop. But now it’s been five years and . . . f–k! He’s not dead yet!” Ward continues: “And he’s impossible to kill, too! I saw him last summer at the water slides. I tried to drown him. Impossible! So I went on the internet to check what his disease really is. And do you know what he has? He’s f–king ugly!” (Ward subsequently referred to Gabriel in videos posted online, in one implying Gabriel’s mother was exploiting her child for money, in another making a reference to pedophilia in the context of Gabriel’s appearance before the Pope).

The audience thinks it’s hilarious (they did, in reality). Naturally, in this hypothetical scenario, Gabriel isn’t laughing at all. Neither is his mother. In fact, she is so angry that she walks onto the stage and smacks Ward across the face. The Bell Centre goes silent. She returns to her seat, and yells, “Get my child’s name out of your f***** mouth.” Ward is a little disconcerted here, unsure what to do. He moves on.

Do you think maybe the mother might have had a case for her smack? I sure do. And I’ll go farther and say that if in reality that was how it had played out, there would have been no need for a human rights case and no need for it to go to the Supreme Court. Because the court of public opinion would have settled the matter. A critical mass of people there would have recognized that Ward had caused anguish to nature’s victim, and they would have been embarrassed by their laughter. It would have been the subject of public debate. In the end, Ward would have decided that it wasn’t worth the aggravation to keep using that joke, and furthermore, it would have been a pivot point — a teaching moment, so to speak — concerning the propriety of exploiting medical disability for comedy.

All the righteous indignation being dumped on me about free speech and the sad state of comedy in these censorious times, and violence is never the answer: They have me rolling my eyes. How come comedians never do blackface any more? Because the courts punished them? No, it just stopped being funny. How come comedians never do falsettos and limp wrists to mock “homos” any more? Because it stopped being funny. Why is physical disability still funny? Search me. I think it is time that it became as socially taboo as blackface. Not through human rights tribunals and Supreme Court edicts, but through people feeling embarrassed by laughter that arises from human suffering. And maybe, hopefully, the Oscars slap that was heard around the world will hasten progress on that civilizing file.